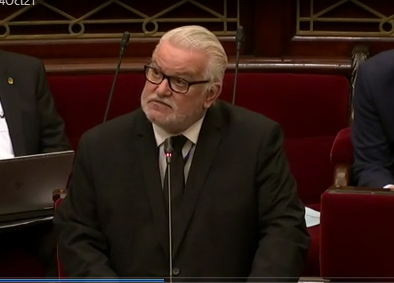 Mr BARTON (Eastern Metropolitan) (15:49): (1459) My question is for the Minister for Roads and Road Safety, Minister Carroll. This question is a follow-up on one of my members statements earlier this week. I expressed my frustration at having the Minister for Transport Infrastructure, Minister Allan, and Minister Carroll each claim the other is responsible for the Williamsons Road development. My constituent is still awaiting a response, so I will ask the question again. Maria has expressed the concerns of residents from Hawtin Street, Templestowe, and surrounds regarding the expansion. The proposal seeks to develop an eight-lane road in the centre of a residential zone in Manningham. The residents have concerns that there has not been adequate consultation with the community regarding this development. I am told that currently neither the construction company managing the development nor the government has provided a clear indication of what is being proposed, so the information I seek is: could the government expand on the development plans for the Williamsons Road expansion and on community consultation that has taken place and the outcome of those consultations?

Thank you for your letter dated 9 September 2021 on behalf of your constituent, regarding the expansion proposed along Williamsons Road in Templestowe as part of the Fitzsimons Lane Upgrade (the Project). I also acknowledge that you have raised constituency questions with me and the Hon Ben Carroll MP, Minister for Roads and Road Safety on this project. I apologise for the delay in responding on this matter.

Fitzsimons Lane is a major thoroughfare connecting those north and south of the Yarra River and is used by more than 60,000 vehicles every day. With the limited number of crossings of the Yarra, it is an extremely important corridor for people in the surrounding suburbs of Eltham, Templestowe, Doncaster, Greensborough, Montmorency, and Lower Plenty. Once the Project is complete, it will improve traffic flow and safety for the local community and commuters who travel through the area.

Regarding your constituents’ concerns about the expansion proposed along Williamsons Road in Templestowe, Major Road Projects Victoria (MRPV) has confirmed that Williamsons Road is not expanding beyond the existing kerb line or encroaching on the open space between Hawtin Street and Williamsons Road. As part of the design process, MRPV has made several engineering refinements to ensure that there are more lanes to help with traffic flow, while also maintaining the Project’s existing footprint. This is an outcome that will greatly benefit the broader road network while preserving the neighbourhood character.

Since 2018, MRPV has consulted extensively with the community, which has resulted in thousands of individual conversations in both person and over the phone with community members, as well as more than 700 pieces of written feedback. In addition, representatives from MRPV have door-knocked local businesses and residents, held one-on-one meetings with community members, conducted briefings with councils and interest groups and run community information sessions. There were also more than 9,000 visits to the Project’s engagement website during 2018 and 2019.

The feedback obtained during this period was used to influence several improvements including access to side roads, redesigns to save significant vegetation including outside Templestowe Reserve, and a greater focus on landscaping.

More recently MRPV has provided detailed updates to local Templestowe residents, and throughout September 2021 held virtual meetings with residents from Hawtin Street. At these meetings residents were able to discuss their individual concerns with the lead project engineer who was able to show the detailed designs and speak to the technical drawings at length.

If they have not done so already, I encourage your constituents to sign up to receive project updates via email and SMS at roadprojects.vic.gov.au.

I trust this information is of use to your constituents.