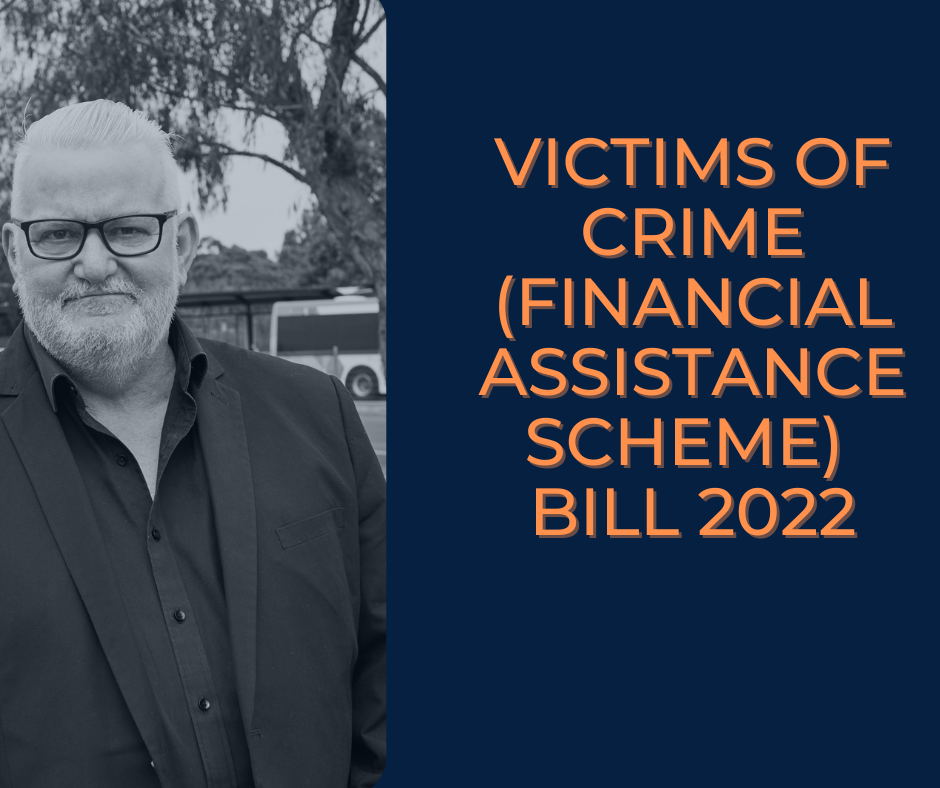 I rise to speak on the Victims of Crime (Financial Assistance Scheme) Bill 2022. This bill makes some really important reforms to the victims of crime financial assistance scheme, and I am sure it will have a real impact on many people’s lives. Some of these important changes have already been mentioned by my colleagues. However, I will run through them briefly. Victims will be given the opportunity to request a recognition meeting with government representatives to discuss the harm caused to them. The meeting will include a personal apology on behalf of the state government. This has not been legislated anywhere else in Australia. Victims appreciate having their experience acknowledged, and this change is a critical part of that.

The bill will remove the current practice of pooling the financial assistance of bereaved families. I know that prior to this change we had close family members being short-changed as others made claims that decreased the pool available. We never should have been inflicting this type of conflict and trauma on families already experiencing so much.

There has also been an increase in the time limit in which victim-survivors of sexual assault or family violence can make a claim, from two years to 10 years. This time extension will be incredibly important for many, as the trauma of being subject to a crime can render them unable to apply so soon after it.

The new scheme itself is also a significant improvement on the existing system, and it is the product of many years of advocacy from survivors, victim support and some of my crossbench colleagues. These reforms are a response to the review by the Victorian Law Reform Commission, the VLRC, which addressed a recommendation of the 2014 Royal Commission into Family Violence.

That is why, despite the improvements made, it is also disappointing to see that the bill failed to deliver on a number of recommendations from the VLRC. I have been informed that these holes in the legislation, pointed out by community law advocates and victims, will be addressed in regulations. That is not good enough. Currently the bill has mandatory grounds for refusal of financial assistance based on character and past criminal activity. This provides far too much discretion, and we know that such broad grounds for refusal will not always be applied consistently. We know that a relationship exists between criminalisation and victimisation. We see that in the high rates of women in prison who have experienced family violence. I understand this was intended to ensure that the scheme decision-maker has sufficient discretion to refuse to grant assistance to a person involved in an act of violence. So why doesn’t the legislation just say that? The VLRC recommended that when determining the recovery payment or amount the decision-maker should have no regard to criminal activity related to drug and alcohol consumption. This recommendation is fair and empathetic, yet absent from this bill.

There is also concern about repaying any interim assistance provided when the financial application is refused. This is a slippery slope. We know that the interim assistance is likely to be spent immediately on counselling or other support services. This means being forced to repay the assistance is likely to put failed applicants in a cycle of unsustainable debt. This repayment should only be required for those who have been fraudulent in their application. It should not be used to disadvantage those who are already vulnerable.

There is also a matter of mandatory police reporting, where victims can be refused assistance because they did not report an act of violence to police within a reasonable time or provide assistance with an investigation, arrest or prosecution. It is incredible that this provision exists given what we know about victims of sexual violence: the bulk of victims do not report sexual violence to police. There are many ways in which a person can prove an act of violence has occurred. This police reporting requirement is not needed.

I understand there are provisions for special circumstances. Speaking to those on the ground at our community legal centres, the term ‘special circumstances’ has been very subjectively applied. I have been informed of a teenager who was sexually assaulted by a much older man, and the victim, who is a child, did not report this crime to police. The Victims of Crime Assistance Tribunal found that this circumstance was still not special enough, and the victim was refused financial assistance. Why has this not been addressed in the bill? We know how under-reported sexual violence is. Why is the government forcing victims to jump through these hoops?

This bill is an improvement on the system we have currently. That is why I will support it today. However, I am disappointed by the notable lack of empathy and understanding shown in certain provisions of the bill. It significantly limits the access to fair financial assistance, but I will commend this bill to the house.