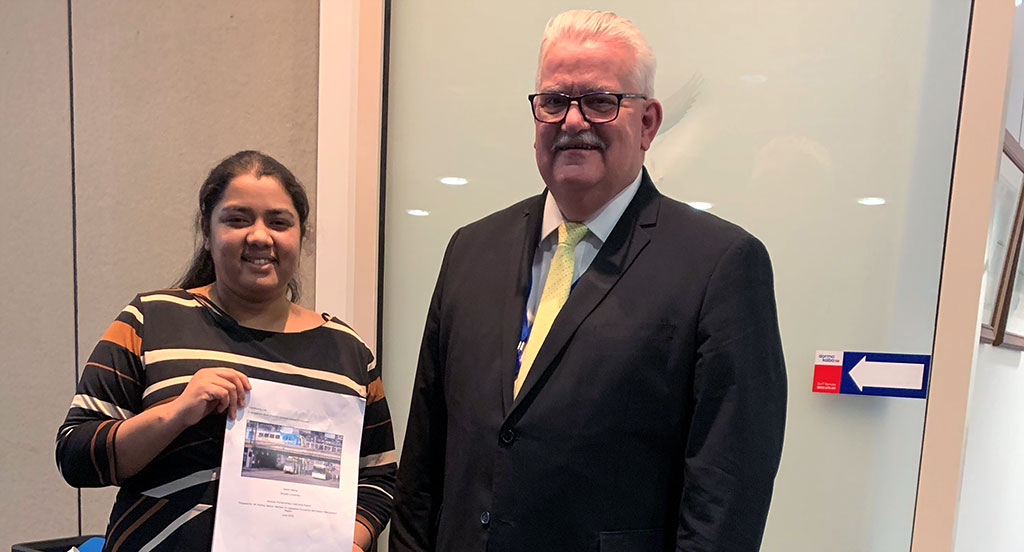 Mr Barton met with the Eastern Transport Coalition of local councils this week to present to them the finding from Monash University intern Nakshi Mehta’s report into public transport options to Rowville.

In April this year we asked the government for an update on Rowville Light Rail project. It’s been over a year since the Labor government announced $3 million for design and planning works for a train or rail extension between Caulfield and Rowville.

To date infrastructure funding in Melbourne has focused heavily on new roads, in fact the last full train line to be constructed here was the Glen Waverly line in 1930 – all other investment has been on managing and growing capacity across the network. Since 2000 less than 10km of new tracks laid.

Trackless Trams are something I intend to investigate further and push as an option on projects such as the rapid transit busway to Doncaster as part of the North East Link project.

Nakshi’s report concludes that the tram line should be constructed, with the heavy rail option left open to be revisited when the Metro Rail tunnel project is complete and adds capacity to current train services.

A major criticism of the heavy rail option to Rowville has been the low density along the line and questions on its feasibility.  However, there is evidence from some recent projects, such as the Gold Coast light rail network, that improving transport infrastructure can increase development along the route.

The Labor State Government has committed to a light rail from Caulfield to Monash via Chadstone Shopping Centre as stage one of a project to extend it through to Rowville.

Minister for Transport Infrastructure Jacinta Allan’s office has confirmed that the planning for the Caulfield to Monash light rail is largely complete in terms of a route selection but cannot be finalised until a decision is made about the location of the Suburban Rail Loop station at Monash University to ensure the tram and trains connect.

We understand that as soon as the location of the Monash station is confirmed the route of the light rail can be finalised.

The Victorian Government has said it will begin work on the Suburban Rail Loop during this term of government – Stage One – the South East Section, between Cheltenham and Box Hill, will includes a rail connection to Monash from both the North (Glen Waverly Station) and the South (Clayton station). Minister Allan’s office says the loop project is incompatible with the Commonwealth’s heavy rail connection.

The Minister’s office is of the view that the loop and the Caulfield to Monash (and then to Rowville) light rail provides the best outcome for Monash, Rowville and Chadstone.

My office will keep working on this and we welcome input from the community.