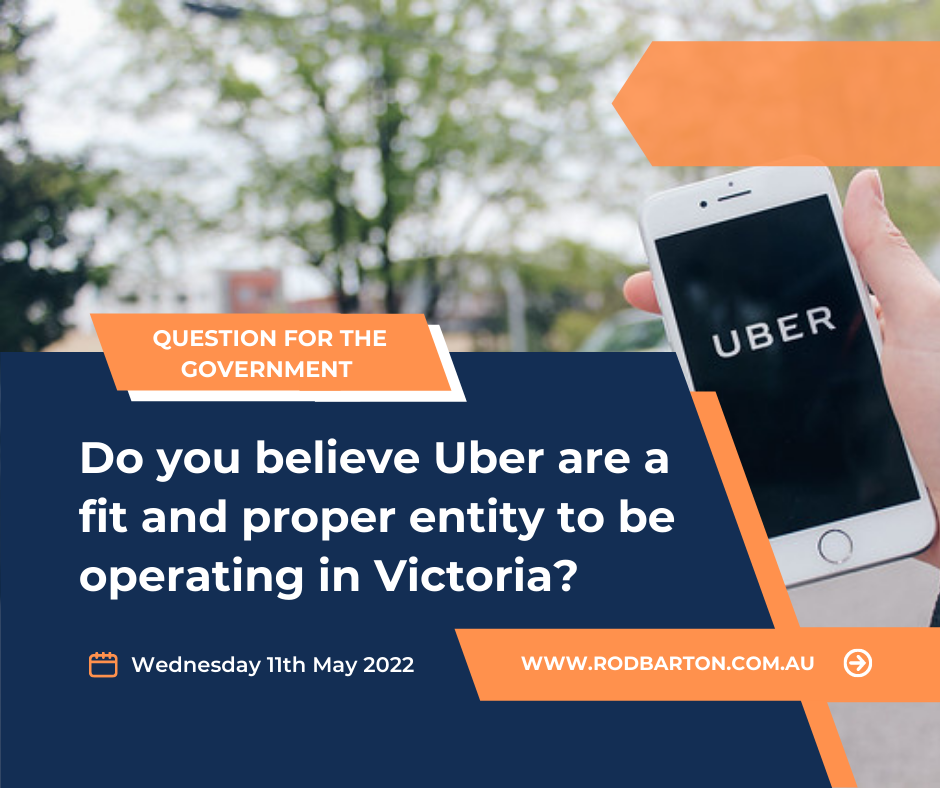 Mr BARTON (Eastern Metropolitan) (12:23): My question today is for Minister Pulford, representing the minister for transport. The Australian Competition and Consumer Commission, the ACCC, has commenced proceedings against Uber in the Federal Court. Uber have admitted they engaged in misleading and deceptive conduct and have made false and misleading representations in their app. Uber have agreed to pay $26 million in penalties, admitting they were guilty of breaching Australian consumer law. The ACCC estimates that two million Australians were affected by this misleading prompt in the app. This behaviour is not surprising. Uber have always followed their own set of rules. So I ask: Minister, given Uber have themselves admitted that they have engaged in misleading and deceptive conduct, do you still believe Uber are a fit and proper entity to be operating here in Victoria?

Ms PULFORD (Western Victoria—Minister for Employment, Minister for Innovation, Medical Research and the Digital Economy, Minister for Small Business, Minister for Resources) (12:24): I thank Mr Barton for his question. As was the case with Mr Bourman’s question, I will seek a written response, in accordance with our standing orders, from the Minister for Public Transport—though one day I would like a question in one of my portfolios!

Mr BARTON (Eastern Metropolitan) (12:25): Thank you, Minister. On the same case I wrote to the ACCC in September 2019 raising the issue that Uber had been falsely representing taxi fare estimates displayed in its app. Uber misled consumers by providing taxi-Uber comparisons that grossly overestimated the cost of a taxi. Uber are now providing services to clients in the multipurpose taxi program, a service for Victorians with disabilities. My concern is that Uber cannot be trusted. These are Victoria’s most vulnerable. We are subjecting them to predatory surge pricing from a company with a history of misleading and deceiving Australian consumers and of failing to notify regulators of sexual assaults and crashes occurring in their vehicles. Minister, can Victorians have confidence that the regulator has the right skills and the teeth to ensure Uber provides accurate and clear prices to the Victorian consumer, especially those in the multipurpose taxi program?

Ms PULFORD (Western Victoria—Minister for Employment, Minister for Innovation, Medical Research and the Digital Economy, Minister for Small Business, Minister for Resources) (12:26): I thank Mr Barton for his question and his ongoing interest. His advocacy for people in this industry is impressive and consistent, and his depth of engagement with the sector and knowledge of various issues I think is recognised by all members in the chamber. Indeed from Minister Carroll I will seek a written response.

I thank the Member for Eastern Metropolitan Region for his question and acknowledge his long-standing advocacy for safety in the commercial passenger vehicle industry.

I am advised that the industry safety regulator, Commercial Passenger Vehicles Victoria (CPVV), has commenced formal enquiries with Uber and the Australian Competition and Consumer Commission (ACCC) regarding Ube r’s admissions that it engaged in misleading and deceptive conduct in relation to cancellation fees in Victoria. The outcome of these enquiries will inform any potential regulatory action by CPVV.

The Andrews Labor Government is committed to ensuring companies operating in Victoria provide consumers with accurate information to make informed travel choices. The Commercial Passenger Vehicle Industry Act contains a range of consumer protections, including requiring booking service providers (BSPs) to provide passengers with fare information and a fare estimate, on request. BSPs who do not comply with these obligations are subject to a range of sanctions under the Act. CPVV has the skills and capability to enforce BSPs obligations under the Act and impose appropriate sanctions where required. The consumer protections available under the Act are designed to work in conjunction with other State and Commonwealth laws that protect consumers in Victoria.