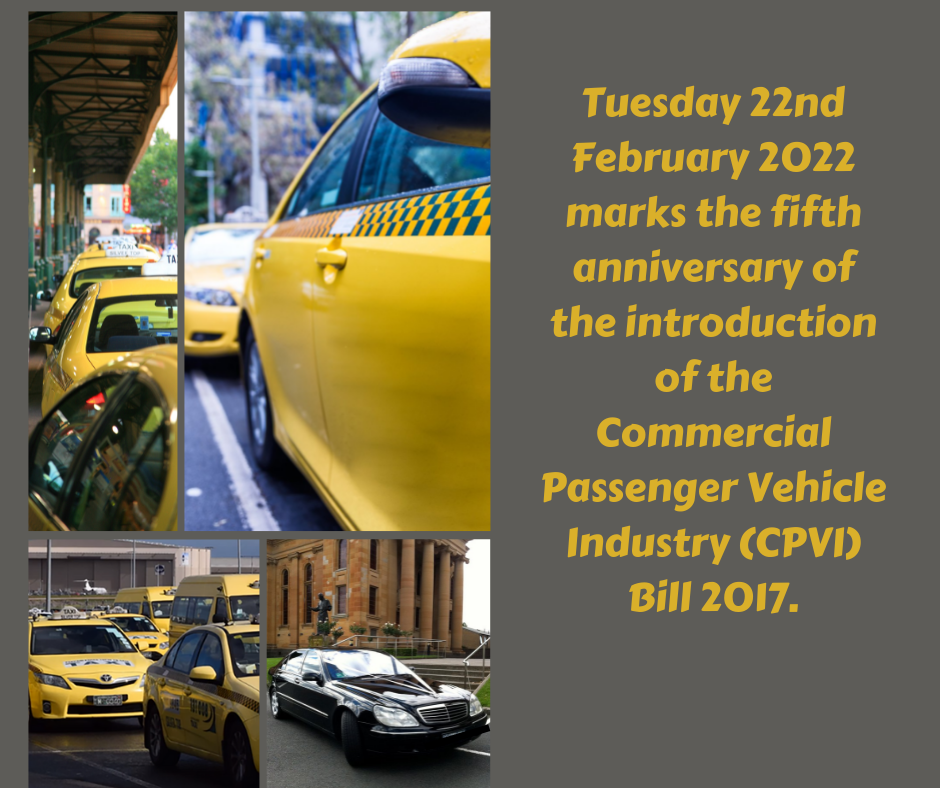 It is a timely opportunity to remind those who were affected by the consequences of this Bill what I and the Transport Matters Party have achieved since this time and what we continue to advocate for as political representatives for stakeholders of the commercial passenger vehicle industry.

When the Transport Matters Party (TMP) was formed, our main agenda was to achieve success in the 2018 Victorian state election so that we were better positioned to work collaboratively with the winning government to address the failures of the CPVI Bill. Our mantra was to leave no stone unturned.

The Bill had very little consideration for the concerns of stakeholders past, present and future. It did not sufficiently recognise the investment of incumbent industry participants who paid a considerable price for following rules and regulations for decades and who ultimately were severely penalised and handicapped by the industry reforms. The level playing field that was promised them never eventuated.

Neither did the CPVI Bill consider the ongoing viability of the industry, or basic regulations necessary to provide a safe, fair, competitive and efficient service to all of its consumers regardless of which type of service they use.

Most notable was the absence of any compensation in the Bill for the compulsory acquisition of perpetual taxi and hire car licences which were treated as assets to this point.

As well as this, the CPVI Bill failed to anticipate the many negative consequences for active industry participants who continue to be impacted by its shortcomings. This is in addition to the poor protections for consumers against extortion as a result of fare deregulation and implications for safety due to soft requirements in the rideshare sector.

Among many other responsibilities associated with representing my electorate of the Eastern Metropolitan region, my team and I work relentlessly on behalf of the industry to address these issues.

It would be well known by now that my hard work and that of key players involved in forming the Transport Matters Party began long before the election. We were instrumental in developing the legal case against Uber which has led to the establishment of the class action being run by Maurice Blackburn. The claim against Uber is for lost income and loss in licence values for participants in the taxi and hire car industry incurred as a result of Uber’s alleged illegal conduct.

The competence and tenacity of team TMP was evident not just in leading this cause but also in securing over $20 million from Harbour Litigation Funding which has enabled the action to proceed at no cost to registrants. From these beginnings and because of the foresight of the executive team, the class action now has over 8,000 registrants and has expanded to include claims for industry participants in New South Wales, Queensland and Western Australia as well as Victoria. It is purported that this will be one of the largest class actions this country has ever seen. The part I played in initiating this fills me with immense pride.

Establishing TMP was not an easy task by far but thanks to all our supporting members and the skill shown by the executive team to secure favourable preference voting arrangements, the battle against all odds was won and a seat was secured in the Eastern Metropolitan region at the 2018 Victorian state election.

This was achieved in the face of circulating rumours and threats from the opposition of the day who tried to sabotage our campaign.

We won in spite of the damage that was tried.

For a long time, we were led to believe that we had a friend in the opposition who seemingly showed support for the industry and the injustice that had occurred when the reforms were implemented. Outwardly, this has always been the message that has been conveyed but true advocacy goes beyond holding a microphone on the steps of parliament and a few supportive social posts.

Words are just wind and the industry was being blown away. We soon learned that there was little activity behind the scenes.

On the other hand, my focus and that of TMP has not waivered since entering parliament. Hansard will show that I have raised industry concerns in every single parliamentary sitting week since I was elected in 2018. I have used every opportunity to advance our cause and to remind the government of why I was elected and what it is that I hope to achieve on behalf of my stakeholders.

According to Hansard, I alone delivered 106 speeches during this parliamentary term which mentioned the word taxi and raised issues concerning the industry. By comparison, there was a total sum of 7 mentions from all other political parties combined for the same period, mostly in response to motions and speeches I presented. There is a lot of smoke and mirrors in parliament but the proof lies clearly in the actions that are taken.

I am the lone ranger. There is no other member of parliament actively fighting for this cause but me and I do this without any meaningful support from any other party.

Despite my best efforts, many important battles remain ongoing. Addressing the inadequacy of compensation for the compulsory acquisition of perpetual taxi and hire car licences as a result of the 2017 reforms remains a complicated and sensitive matter that is yet to reach a conclusion.

During the height of the pandemic, the government had little band width for anything other than the unfolding and continuous crisis that COVID created. Although disappointing, COVID has understandably delayed a resolution addressing our concerns. Now that the urgency surrounding the pandemic has eased, we seek your patience in these matters as we re-commence discussions and push for an outcome in the coming months. This will finalise the government’s response to the parliamentary inquiry into the 2017 industry reforms which included a recommendation for a review of the transitional funding package for perpetual taxi and hire car licence owners.

While our most important and difficult battle has proceeded slowly in the background, we have had many wins along the way which would not have been possible without the continued support of our members and the invaluable work of my team.

These outcomes and many others would simply not have been realised without my involvement and the advocacy of the Transport Matters Party. My role in parliament has given me a platform to provide the industry with a voice which would not otherwise be heard.

It is an election year, and we are already seeing a repeat of the behaviour ahead of the last election with the opposition whispering sweet nothings in the ears of our stakeholders. While we appreciate their sympathetic view, we should also consider their slim track record for achieving successful outcomes on behalf of the industry. Let there be no doubt that I am on my own.

Words are cheap and a mere reminder of the financial destruction caused by the reforms does nothing to change the lives of anyone. Actions are what is needed. It is imperative that the opposition are held to account to explain exactly how they intend to rectify matters . Prior to the last state election this simply amounted to a pledge to review the Fairness Fund and lacked any firm commitment to award compensation to licence holders.

When TMP was formed and even more so since being elected to parliament, I have taken very seriously my commitment to represent the industry. The primary aim has always been to try to repair the past and work to improve the industry for all stakeholders going forward. The list of our achievements is evidence that this has not changed.

I will continue to fight your battles for as long as I am given a platform in parliament to do so. However, I cannot do this alone – there is strength only in numbers.