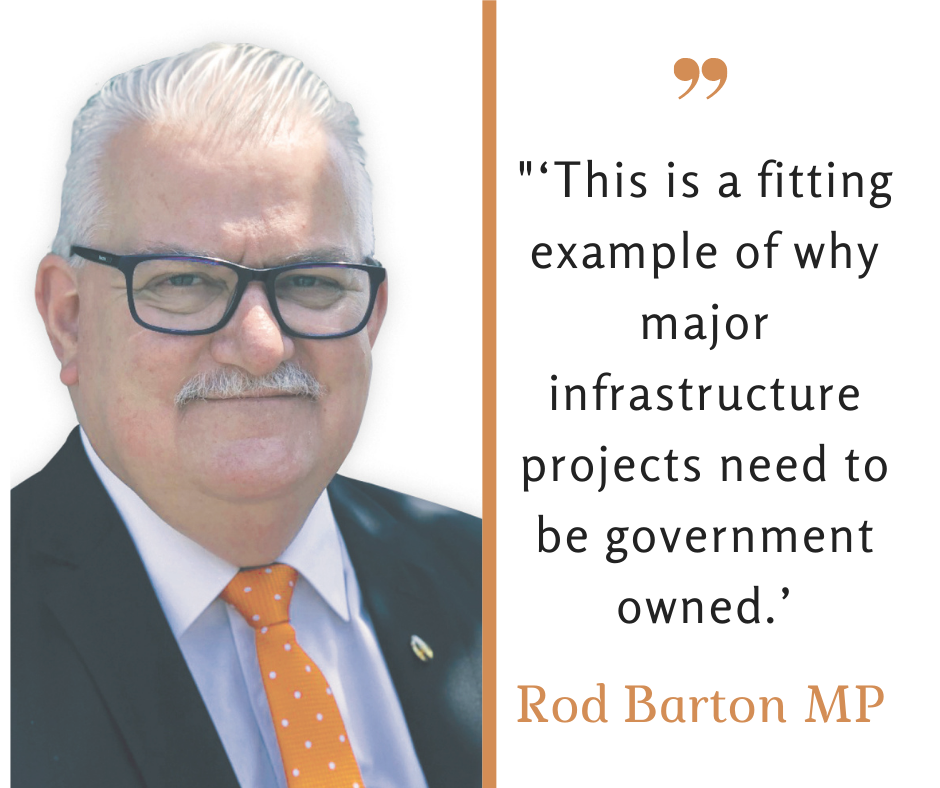 Rod Barton MP believes that the $3.3 billion budget blowout to Transurban’s West Gate tunnel project is further proof of the consequences of privatisation.

As the budget blowout reaches the headlines, Transurban is vying for sympathy and seeking to share the burden with Victorian taxpayers.

We will not forget that this project is already being cross-subsidised through a 10-year extension to tolls on CityLink until 2045 intended to fund the West Gate Tunnel.

Transurban put the original proposal to government, they nominated the price, chose the builder and now they must get on with it and deliver on the contractual agreement.

Yes, Transurban ‘discovered’ 3 million tonnes of contaminated soil. There are challenges, but this is not their first rodeo.

Barton says, ‘This is a fitting example of why major infrastructure projects need to be government owned.’

‘These large corporations are in it for the bottom line. It is glaringly obvious that they will use the power they wield across other road infrastructure to hold Victorian taxpayers to ransom,’ he says.

We have seen this with the Airport rail project where a private consortium including Metro Trains Australia, Melbourne Airport, Southern Cross Station, and superannuation fund IFM Investors put forward a proposal to co-invest.

It is clear these players intend to do more than just fund the project.

“The last thing we need is one consortium controlling airport rail prices, the rate of airport carparks and Transurban controlling the cost of Citylink tolls on the way to the airport. This is a recipe for disaster for Victorian taxpayers,” Barton says.

Time and again, we build up these big corporates, creating dependencies that allow them to hold Victorians over a barrel.

Transurban, it is time to do your job.