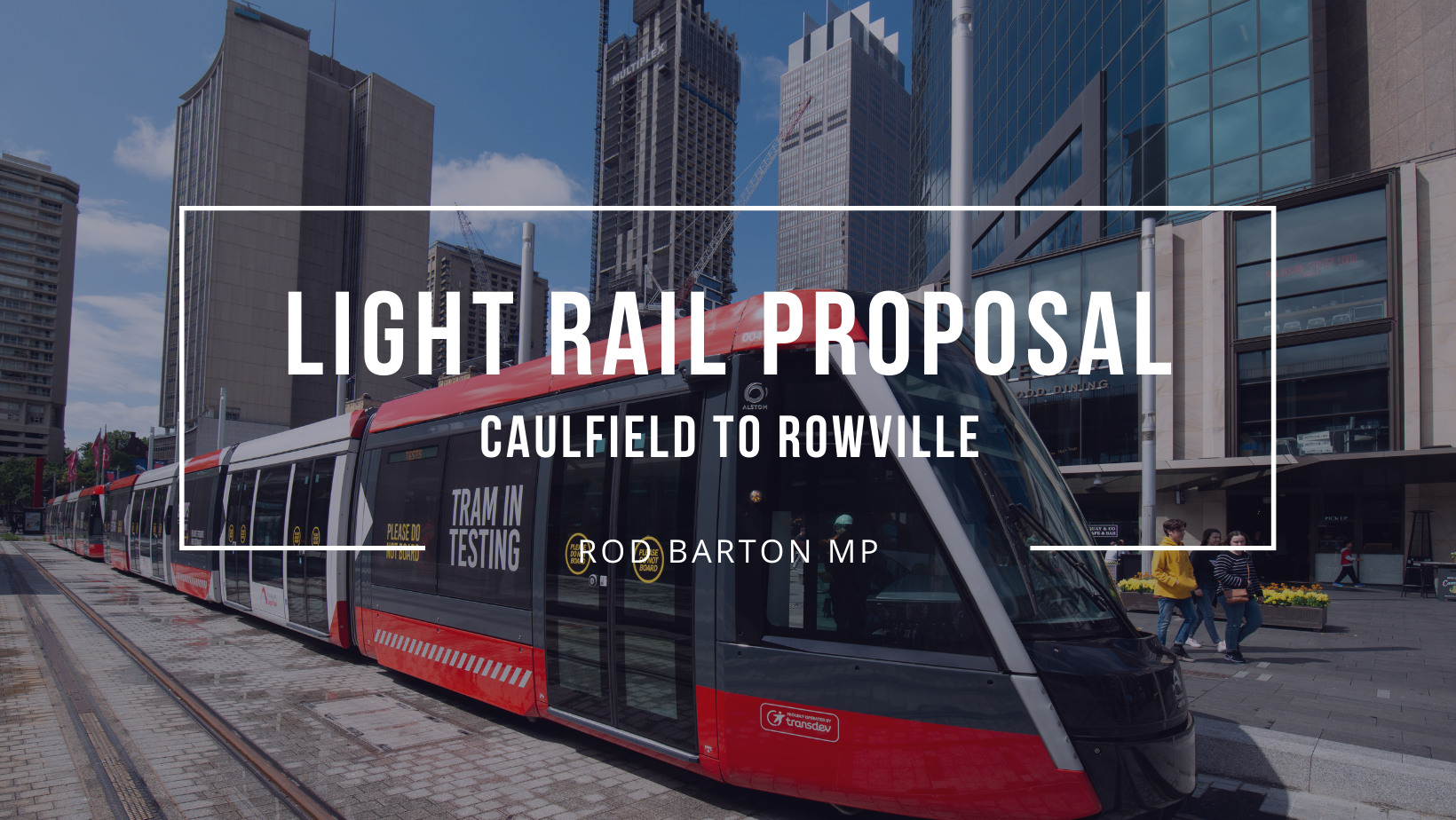 Mr BARTON (Eastern Metropolitan) (17:56): My adjournment tonight is for Minister Allan, the Minister for Transport Infrastructure. Last week I was pleased to meet with both Vicinity Centres and Monash University regarding their proposal for trackless trams between Caulfield and Rowville. This $1.45 billion trackless rapid transit, or TRT, proposal would connect Caulfield station, Chadstone, Monash Clayton and Rowville, improving access to jobs and services as well as slashing billions from the cost of a heavy-rail transport link between Caulfield and Rowville. These high-capacity electric TRT vehicles could be up and running on the route by 2025. This is very exciting new technology, and I think this is the beginning of an important shift. For a long time heavy rail has dominated our transport system. While it certainly is the best option in some circumstances, in others it can be absurdly expensive and lack the flexibility to be adapted to future transport needs. Trackless trams are cheaper, more flexible and faster to construct than heavy rail. They can deliver the ride and experience of a tram without the expensive infrastructure, including dedicated tracks and overhead wires.

This proposed trackless tram could carry up to 1800 passengers per hour in each direction, delivering travel times of 20 minutes between Caulfield and Monash Clayton and 11 minutes between Monash Clayton and Rowville. I believe this proposal is deserving of the government’s consideration. We must look to future problems. We know congestion will be an issue, we know that the south-east economic corridor is rapidly expanding and we know that we should be reducing our emissions by employing electric technology. Meeting these demands requires innovative solutions. In many cases it will be of great benefit to have a low-cost transport solution that can be adapted to future needs, but we need to have a shift of mindset first. Therefore the action I seek is: will the government consider the adoption of trackless trams to solve the lack of mobility in the south-east economic corridor?

I thank the Member for Eastern Metropolitan Region for his question and his continued interest in the Andrew Labor Government’s transport infrastructure investments in Melbourne’s east.

I acknowledge the Member’s support for the trackless tram proposal.

The Victorian and Commonwealth Governments have agreed to undertake a business case into the proposal.

The list of organisations who support this approach includes:

The list of organisations who do not support this approach includes: