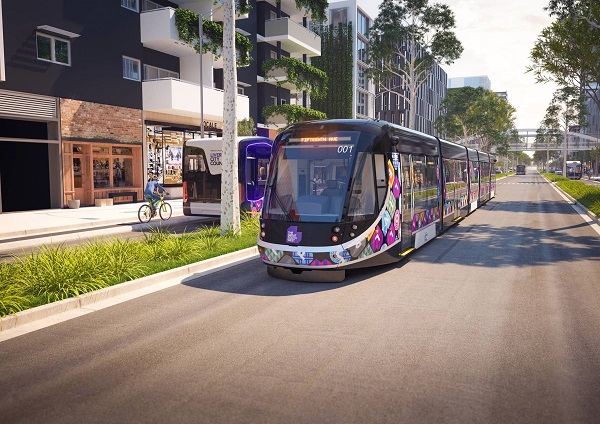 Eastern Metro MP Rod Barton says trackless trams are an obvious option to explore for the new “busway” services proposed in the North East Link plans and would meet the long promised rail connection from Doncaster to the city.

Mr Barton has raised the trackless tram model multiple times with Victorian Government ministers and said it was disappointing to hear that Sydney may get the jump on this new transport technology.

“Trackless trams have the potential to solve many of our transport problems. They are cheaper and faster to implement, they can integrate into existing tram lines, they are electric so come with environmental benefits, and they are able to carry many more passengers at a time than a traditional bus services,” Mr Barton said.

The NSW government has shown interest in connecting the new Badgers Creek Airport to Liverpool in Western Sydney.

A trackless tram service could be easily implemented to run along the proposed Rapid Transit Busway along the northern edge of the North East Link, but rather than merge into traffic at Hoddle Street, a tram service could run through a new centre lane down Alexander Ave, merge into the existing tramway at Nicholson Street and complete a loop of the city before heading back out to Doncaster.

“I have raised the trackless tram options many times with Government as an option for Doncaster and also for the Rowville Rail services.

“Trackless trams are carbon-zero and can be scaled up and down relative to demand and have potential for automation in the future. Best of all they can be built quickly and easily.”

Currently used in China and some parts of Europe, a trackless tram can travel at 80km/hour with rapid acceleration and deceleration while carrying between 300 to 500 passengers. The technology also allows for autonomous operation and can be sustainably powered using rooftop solar panels and wheel generators that feedback reserve power storage as the tram moves.

“Trackless Trams also can be easily integrated into the city’s existing public transport network where more buses cannot. Plus, they can be delivered at a fraction of the cost of conventional tram or train networks and can be integrated into the design of terminals,  enabling ‘park n ride’ carparks, to become thriving economic centres,” he said.

Mr Barton has advocated for priority delivery of the busway as part of the North East Link project to ensure there are viable alternative transport options during disruptions to the Hurstbridge line and added congestion during the seven year road construction.

“Construction of the North East Link will put additional pressure on the roads and is yet another reason why the ‘busway’ facility must be delivered before major works commence,” Mr Barton said.

“The current plans for the Doncaster busway are sadly lacking – they show no detail or practical solutions for merging bus services into the city network when they hit the end of the eastern freeway at Hoddle Street – and they offer no comfort to the citizens of Doncaster, indeed of the entire Manningham Council area, who have been waiting for promised rail services for 128 years.”

In Parliament this week Mr Barton asked the Minister for Transport Infrastructure Jacinta Allen to put some serious planning into the Doncaster busway and to consider trackless tram technology as an option to deliver long awaited rail services to Doncaster.