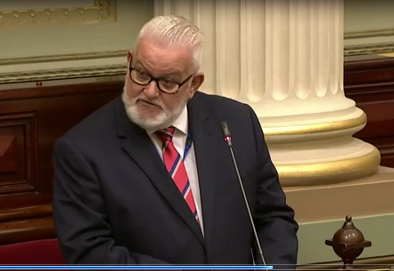 Mr BARTON (Eastern Metropolitan) (14:14): I too rise to speak about the Summary Offences Amendment (Decriminalisation of Public Drunkenness) Bill 2020. Those of you who know me will know that I will be supporting this bill; of course I will.

Every year over 8000 individuals are arrested for being drunk in public places under one of the three public drunkenness offences. On average approximately 22 Victorians are taken into custody while drunk every day. After two royal commissions and one parliamentary inquiry into public drunkenness over the last 30 years we know that a public health response to public drunkenness is what Victoria needs and must have, and later today we will have it.

Statistics show us that those experiencing homelessness and those of Aboriginal and Torres Strait Islander descent as well as those of Sudanese descent are over-represented in alcohol-related offences. As an advocate for overcoming Victoria’s homelessness crisis, I strongly recognise the need for wraparound support services to aid individuals in overcoming alcohol and drug abuse, to find suitable housing and to provide health support. Sadly since the first royal commission in 1991 there have been a startling number of deaths in custody, particularly Indigenous Australian deaths. While not all involved intoxication, a significant portion did. Preventing deaths in custody, supporting Victorians and reducing alcohol-related crime are why this bill is a step in the right direction. Many have raised concerns around the implementation of this bill, and I think the concerns are being raised because we do not know what we do not know. Things are going to be done over the next 20-odd months.

Firstly, a total public health response would see no involvement of police officers whatsoever. In a perfect world that would be fantastic. Our public health services are already struggling. You only have to go to our local emergency department on a weekend to know how they are overflowing, and even more so in our rural and regional communities where there is a challenge with staffing and services. But we must ask ourselves: how will this bill work in reality?

Secondly, we must consider the safety of those who will be charged with the duty of moving and handling these individuals. We have heard from two ex-coppers in this place of their experiences. I am also someone who has worked for more than 30 years dealing with people who have over-refreshed. I can tell you as a taxi driver that I have been punched, I have been robbed, I have been kicked in the head, I have had rear-vision mirrors smashed off my car, I have been vomited on—it does not always happen on the same night. There were some very sad cases and there were some very violent cases, but I was always in a position—I was big enough and ugly enough—to settle it down. I think the two ex-coppers would agree with me in saying that dealing with those who are drunk is not pleasant. It is obviously dangerous, and even more so when drugs are involved.

Thus if not the commercial passenger vehicle industry or Ambulance Victoria, who will be employed when transferring these drunk individuals? This is going to be specialised work. I would like to think that the taxi drivers are pretty good at this, because it is what we do seven days a week. Is $16 million for the trial sufficient? Not only does this amount need to cover the cost of creating sober-up centres but it must cover staff, equipment, training and transport and fund additional wraparound services. Further, how will this trial effectively cover both metropolitan and particularly rural Victoria? How does the government propose to sufficiently cover all of regional Victoria?

Thirdly, after speaking with former police officers and hearing from existing numbers of the police force, I found myself asking: how will we ensure the safety of those drunk individuals? What about the police officer’s duty of care, and what about those involved in family violence?

Someone very close to me had an ex-partner with a restraining order return to her home drunk. The situation escalated and violence was committed. This is the real world. It is rare that our police are able to be proactive before a more violent crime occurs, but public drunkenness is one example. It enables police members to step in before brawls break out and before that one punch occurs, and it protects women from domestic violence, from being forced to take their aggressive drunk husbands home, by enabling police to step in and take them to cool off at the station.

Further data shows us that 85 per cent of offenders only end up in custody on one occasion in their entire life. I ask myself, would the government not be better off to commit to employing a medical officer—as has been suggested, like they do in South Australia—at every police station with cells with a watch house?

I agree wholeheartedly that it is well overdue that Victoria remove the offence of public drunkenness, but I ask the government to be cautious, to be practical and to think about the safety for not only those intoxicated but those affected by the actions of those individuals. I commend this bill to the house.