Mr BARTON (Eastern Metropolitan) (12:19): My question is to the Minister for Roads. I ask the minister to explain why VicRoads have ceased to release VH plates to hire car operators in Victoria, keeping in mind that VicRoads have reserved the plates from VHA right through to VHZ.

During discussions leading up to the Commercial Passenger Vehicle Industry Amendment (Further Reforms) Bill 2017, Minister Allan assured the industry that VH plates would continue to be available. Hansard records show that government members assured members in this house that it had no plans to change the arrangements for VH plates. However, we have repeatedly received complaints that VicRoads will not release VH plates. Operators upgrading their current vehicle and attempting to put their original VHA plates onto their new vehicles have been told their VH plates have to be returned to VicRoads. VH plates are the brand of the marketplace. They are significant. They signify a professional service. I ask the minister to clarify the department’s position on this matter.

Ms PULFORD (Western Victoria—Minister for Roads, Minister for Road Safety and the TAC, Minister for Fishing and Boating) (12:20): That is a much more sensible question. I thank Mr Barton for his question and for his interest in this. Indeed I was one of the government members who made that very point in the committee stage as the reforms were debated, and so I am familiar with the undertakings that were made by the government at the time.

This is an important issue, and I recognise the member’s interest in it and thank him for bringing this to my attention. Our offices have been working closely on this since Mr Barton first brought this to my attention a couple of weeks ago. That the plates ceased being issued occurred without ministerial oversight. I have instructed VicRoads to work to restore the issuing of VHA series plates. This decision was taken in December 2017. I absolutely understand the importance of these plates for operators and for the community. The image that they portray is one of reliability. The brand is a strong and positive brand, and it is important that it exists in the marketplace. It is a brand that is of value to operators and is of value to customers, so I can certainly assure you that we will continue to work to find a satisfactory resolution to this issue.

Mr BARTON (Eastern Metropolitan) (12:22): Can the minister assure us that VH plates will only be made available to vehicles that have a commercial passenger vehicle licence attached to the vehicle?

Ms PULFORD (Western Victoria—Minister for Roads, Minister for Road Safety and the TAC, Minister for Fishing and Boating) (12:22): I thank Mr Barton for his supplementary question. That assurance is not one I am 100 per cent confident I can make in the house today. I can absolutely give you the assurance that we will fix this. As to precisely how, that is something that I am still getting advice on. But if I could, President, take the opportunity to undertake to provide a written response and take that part of the question on notice, I think within the usual time frame, hopefully we will be able to have a really clear answer for you on that. 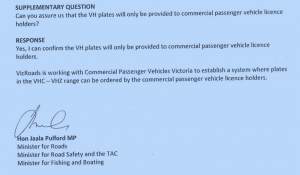