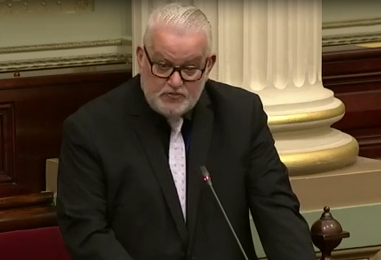 This week, Rod asked the Government to call upon QANTAS to halt the outsourcing of Victorian workers that is creating an environment of insecure work.

Mr BARTON (Eastern Metropolitan) (22:53): My adjournment tonight is for the Minister for Industrial Relations. In the middle of a pandemic, when aviation is on its knees, Qantas is moving to outsource 2500 of its loyal, hardworking, highly trained workers. Over 500 Victorians are set to face Christmas with no hope of a bright 2021. These workers are the people who get you and your bags on and off the plane, get the linen and the food onto your flight, clean the cabins so it is safe and push your aircraft back to send you on your way.

Qantas admits these jobs must still be carried out; it just does not want its own workers to do it anymore. Instead it wants outside agencies which pay workers less to do it. These workers are not being made redundant; they are being replaced. To rub salt into their wounds, Qantas rejected an in-house bid by its workers for their own jobs despite that bid being cheaper than the average bid from outside agencies. One of these Qantas workers about to lose their job is my nephew, who has worked as a baggage handler in Cairns for the past 14 years. I know the dedication and pride Qantas workers bring to their jobs, and I know how devastating it is for them to be pushed out in this way.

Qantas has received substantial amounts of public support since the pandemic hit, grounding its aircraft. Reports to June show the airline received $800 million in JobKeeper payments for its workers and to keep the flying routes open. Now, despite our support for Qantas, it is letting down its workers when they need it most. This is not the spirit of Australia, and I condemn Qantas for these actions.

The action I seek is for the Minister for Industrial Relations to call upon the airline to halt the outsourcing of Victorian workers that is creating an environment of insecure work.