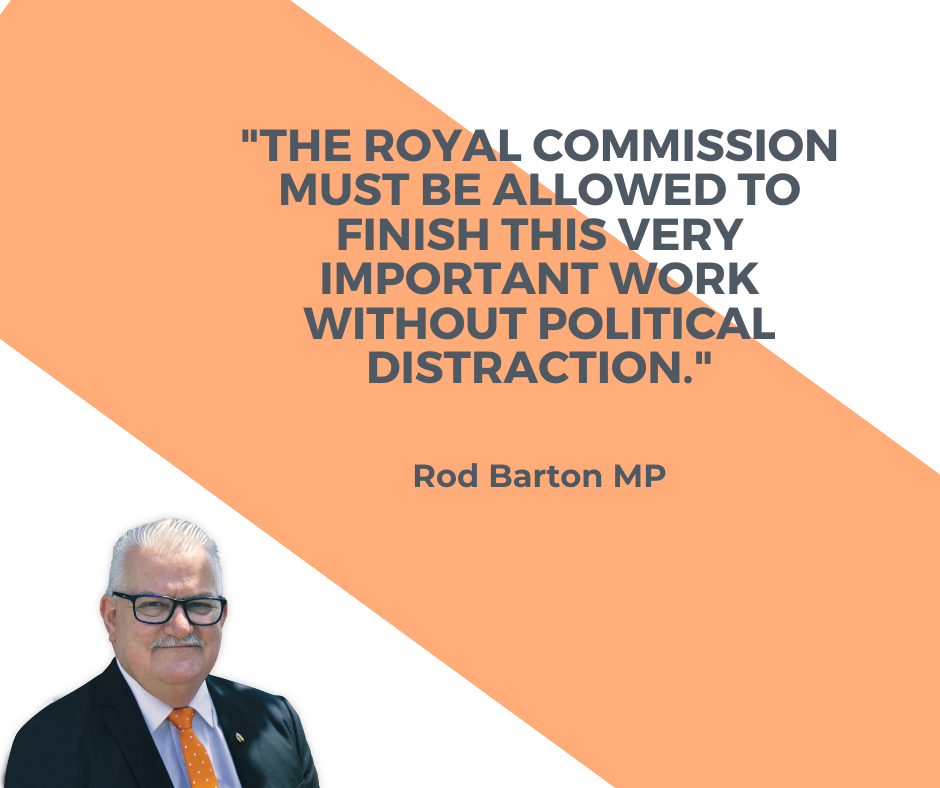 Mr BARTON (Eastern Metropolitan) (14:26): I rise to speak on Mr O’Donohue’s motion 603. For the following reasons I will not be supporting this motion. This sends a very poor message to the public. It is saying that the Parliament does not have confidence in the royal commission. It is a reflection on the commissioner and it could be seen by some as setting a precedent to run interference on a royal commission.

I had a quick look yesterday and could not find another instance where a parliament ran an inquiry while a royal commission was taking place. This would be unprecedented. This is a $20 million royal commission. I think some people here think they could do a better job than Commissioner Finkelstein, but they may have tickets on themselves. The royal commission must be allowed to finish this very important work without political distraction. The government, for whatever reason—and it is their choice—have made it very clear that they wanted to separate the work of the royal commission and the review of the regulator.

Last February the government appointed Ms Deborah Cope, a person who has over 30 years experience in analysing and reforming public policy and regulatory practice. She has worked to develop and implement consumer and competition policy, and has a particular focus on developing and applying risk-based regulation principles. She works with government groups to facilitate the most efficient and most effective policies and regulations and to enable regulators to work at their peak efficiency. Her advice to the government on the future of the casino and gambling regulation has been for a single regulator, the Victorian Gambling and Casino Control Commission. It will have two arms: one to regulate the gambling and one focused on holding the casino to account. The VGCCC will have a strong focus on harm reduction.

Ms Cope has not finalised her work, and she must be given every opportunity to complete that work. For those who have a genuine concern, and there are many in here who want to scrutinise the regulator, they will be able to when the new legislation comes to this house. We will be able to go over this legislation regarding this regulator with a fine-tooth comb when it comes before us, and that is the appropriate time. I will just say to those who are outside the tent and believe they have serious and genuine concerns: you have avenues to express your concerns, and they are IBAC and the Ombudsman. However, I strongly encourage you to engage with the Cope review.