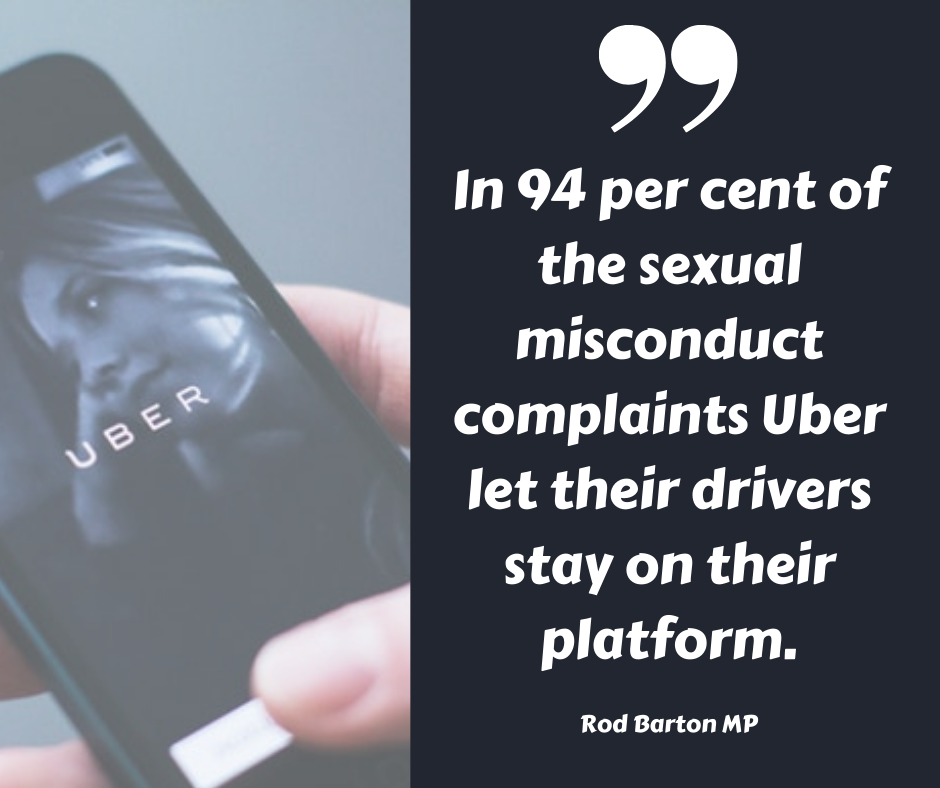 Mr BARTON (Eastern Metropolitan) (12:26): My question today is for Minister Pulford representing Minister Carroll. Some of you may be aware of an article in yesterday’s Sydney Morning Herald titled ‘Every day, two sexual assault or misconduct complaints hit Uber’. An audit by the New South Wales point-to-point transport commissioner showed that in New South Wales alone Uber had 516 complaints of sexual misconduct and assault in a six-month period, almost three a day. In 94 per cent of the sexual misconduct complaints Uber let their drivers stay on their platform. In fact drivers stayed on the road even after multiple complaints, including one who was offering free rides in exchange for sex. This is disgusting, vile and abhorrent behaviour. Given that New South Wales Uber is receiving an average of almost three reports of sexual assault and misconduct a day, my question is: how many notifiable incidents have been reported by Uber to Commercial Passenger Vehicles Victoria in the past year?

Ms PULFORD (Western Victoria—Minister for Employment, Minister for Innovation, Medical Research and the Digital Economy, Minister for Small Business, Minister for Resources) (12:27): I thank Mr Barton for his question. I did see the article that he referred to, and there are some very concerning observations made in that article. I will seek a written response from Minister Carroll for him.

Mr BARTON (Eastern Metropolitan) (12:27): Thank you, Minister. Currently the public do not have access to the notifiable incidents reported by different market players in the commercial passenger vehicle market. It is my view that the Victorian public is entitled to this information. In New South Wales these statistics are publicly available. If a market player is reporting a large number of sexual assault and misconduct complaints, the public should be aware of it. If the market player is allowing drivers who have been reported for sexual assault to continue to service the public on that platform, the public should be aware of that. If the lack of safety requirements such as tamper-proof cameras or GPS tracking has led to one sector of the market experiencing higher rates of sexual assault and misconduct, the public should be aware of that. So my supplementary is: will the minister require these notifiable incidents to be published online to ensure public transparency and accountability?

Ms PULFORD (Western Victoria—Minister for Employment, Minister for Innovation, Medical Research and the Digital Economy, Minister for Small Business, Minister for Resources) (12:28): I thank Mr Barton for his supplementary question and interest in this matter, and I will seek a written response to that from Minister Carroll as well.