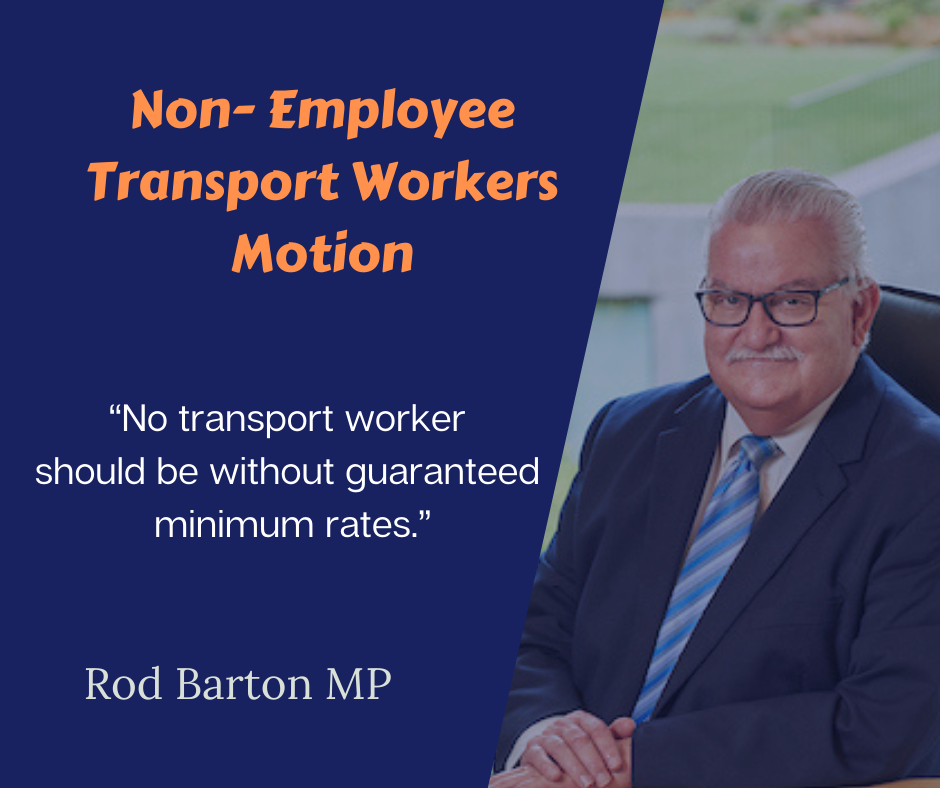 (1) calls on the government to establish a tribunal comprised of industry experts to oversee all non-employee transport work and workers, regardless of label, in Victoria that will have the power to:

(a) set minimum and enforceable standards, including pay and conditions, across a company, sector or industry;

(b) enter into enforceable and certified collective agreements through a bargaining regime;

(c) resolve any disputes, including unfair terminations of contract, through conciliation and arbitration;

(d) review unfair contracts, including where the contracts become unfair in the course of operation;

(2) further calls on the government to:

(a) ensure that there is an adequate enforcement regime underpinning the work of the tribunal as well as appropriate auditing, training and education through the transport industry;

(c) table the tribunal’s report in the Legislative Council.

Owner-drivers running small businesses off their trucks, vans, cars or bikes are the salt of the earth. They are everyday Australians, entrepreneurs and contributors to our society. Their jobs are based on a fair go. They have a vehicle, they are skilled at driving it, and they will do so for a reasonable fee to get passengers, food, medicine and parcels to the places where they need to be. The problem is Victoria is missing the regulation to make sure that a fair go applies to them. Unlike employee truckies, couriers or delivery riders, owner-drivers have next to no entitlements. This is a problem now more than ever.

Following the emergence of the gig economy, transport is an industry that has seen major changes over the last few years and certainly since I started driving professionally more than 30 years ago. I witnessed the years of hard work as we built up regulations to bring our taxi industry up to a reasonable standard. It was certainly not perfect, but it was far from the free-for-all we have got today. Things must change. The arrival of the gig economy giants like Uber and Amazon Flex have distorted the transport industry. They have hidden behind laws that were never written to capture this kind of work, and they have shifted the goalposts every time the law has tried to catch up.

In fact I have personally been affected by this. When Uber arrived, it slashed my income. I had to sell the family farm, and I am still dealing with the fallout of that. Yet I know that thousands of other families were worse off than me. I know that Uber drivers are struggling to make ends meet. I know that without regulation the future of transport is Amazon Flex, an arrangement that pays less than the minimum wage and sees drivers fired if they cannot deliver high volumes of parcels within a 4-hour window. This does not just affect workers in the gig economy. There is downward pressure on the transport industry, and our state is not prepared to protect its drivers.

Truck drivers were our lifeline during the pandemic. We recognised our reliance on them when driver shortages led to empty supermarket shelves. So what will become of us when they are forced to park up because they can no longer turn a profit? Victorian Autocare owner-drivers recently had to do just that. These workers are car carriers, transporting the Toyotas and Mitsubishis. With skyrocketing fuel costs and high inflation across the board, some of these drivers were making just $10 an hour after costs. Some are barely breaking even. Yet their company, their principal contractor, wanted to slash their pay even further—to just $1.65 a kilometre. It would have cost them more to work than it would to park up their trucks, so they switched off their engines for weeks. Thousands of cars were left stranded in the holding yard with no-one to carry them to the dealerships.

Striking is not the first option or the second option, it is the last option, because the bills do not strike with you. You will not get any solidarity from the banks. These owner-drivers had no choice. They had no choice because refusing to work was the only thing that they could do to stop their pay being further slashed.

Last week those workers won. They achieved pay increases that will help them somewhat keep up with the rising fuel costs and the burdensome cost of living. They should not have had to struggle through weeks without work to achieve a reasonable outcome. No owner-driver should be without a guaranteed minimum rate.

Here is the clincher: there is a ready-made way to fix this. New South Wales has had legislation in place since 1996 that protects the pay, the conditions and the rights of owner-drivers. It is not perfect, particularly as it does not cover many workers in the gig economy or extend to all parts of the state, but it is a damn sight better than what we have. We have nothing in place to set enforceable minimum rates or conditions for drivers to keep them turning a profit. Chapter 6 of the Industrial Relations Act 1996 in New South Wales sets minimum rates of pay for owner-drivers. Earlier this year it was extended to Amazon Flex, providing the first minimum rate for Amazon Flex drivers in the world. Chapter 6 has a mechanism to apply for rate increases to support cost recovery.

In April, the same month Autocare trucks were gathering dust in the parking bays, the New South Wales Industrial Relations Commission approved an increase to minimum rates so that owner-drivers could recover the price hike in fuel. What took weeks of strikes to resolve at Autocare took days to resolve in New South Wales, and workers there never had to sacrifice a day’s pay to achieve it. I commend the Autocare workers and their union, the Transport Workers Union, for their great win. In their honour, I think we owe it to the state to make sure that no owner-driver has to fight so hard and sacrifice so much just to receive fair pay again.

The Victorian government recently announced it would create fair conduct and accountability standards to help improve the bargaining position of owner-drivers, among other workers, before working on other platforms in the on-demand economy. As well intentioned as this legislation is, it again fatally misses the point. It adopts the same flawed approach at the heart of the Owner Drivers and Forestry Contractors Act 2017—no enforceability, no ability for workers to effectively collectively bargain and no effective solution to the pressures which these workers face.

Chapter 6 allows drivers to bargain for agreements rather than have rates unilaterally set or slashed on a whim. It allows for dispute resolution over issues like unfair termination, something that would come in extremely handy with the likes of Amazon Flex, Uber and Deliveroo. For a quarter of a century chapter 6 has been an incredibly useful tool in New South Wales, ensuring industry standards and fair competition. In 2022, with the erosion of rights we are seeing at a rapid pace, it is shameful that we have no system like this one in place in Victoria. Clearly we cannot wait for the commonwealth to act. We need our own robust system—an independent body to create legislated standards for all transport workers. We need regulation to kill off contractor loopholes that enable the exploitation of drivers and encourage this race to the bottom for pay and conditions.

Transport is a hardworking industry; I know that from experience. All these small business owners are asking for is the ability to make a fair living, and Autocare drivers are far from the only ones. In fact these companies are driven to these extreme measures because of a dog-eat-dog market with no safety net. The likes of Uber and Amazon Flex are driving standards into the ground and obliterating any sense of fair competition. Drivers in the gig economy do not even have basic working rights like a minimum wage, and they can be terminated from their jobs via an app, without even speaking to a person. They have no real way to appeal industrial disputes or unfair dismissal and they do not have proper access to workers compensation.

Take the case of Diego Franco, a young father and a Deliveroo rider, sacked with no warning or right of reply because Deliveroo said he was too slow.

Last August Diego won an unfair dismissal case at the Fair Work Commission. Now he stands to have that decision overturned. That is because to win an unfair dismissal you first must prove that you are an employee. A recent High Court decision made it harder for Diego to make this case. And why should he have to? If the court finds that he was not an employee, does that mean he was wrongly sacked? Commissioner Cambridge described Diego’s sacking as ‘most notable for its absence of compassion’.

Workers like Diego deserve protections against cruel terminations, and they should not have to prove they are an employee to be treated with respect. Owner-drivers most often work for one principal contractor. When they have no rights or legal protections, they are at the whim of these companies. It is a lethal power imbalance that puts drivers in danger. When margins are tight, truck maintenance is the first thing to go. Then there is the pressure to work longer and harder and stay on the road well past the legal limits, and we know drivers fall asleep at the wheel.

We cannot afford to leave this crisis alone. Enforceable minimum standards would insulate the transport industry. They would give owner-drivers back the right to a fair go. They would promote healthy competition and keep owner-drivers in business. They would save lives on our roads. That is what we could achieve today, and we would be wrong not to do so.

I do want to reflect on a few of the things that have been said. It is clear—it is absolutely clear—that those who opposed to this motion have never been in the position of these workers. They have no idea. This is a very serious issue, and we take it very seriously. Quite frankly, Mr Ondarchie’s patronising response to me did not do anybody any favours, because I just want to tell you how many people this would affect. It is not a few thousand people, it is not tens of thousands of people, but hundreds of thousands of transport workers and their families who would be better off if we had this tribunal. This is a challenge. We can blame the feds, but nothing is ever written in stone. There is always a way we can change things.