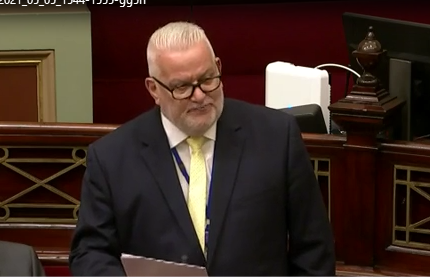 Mr BARTON (Eastern Metropolitan) (15:44): I have to say that seeing this motion did make me laugh. I laughed at the hypocrisy.

The Greens would have you believe that this crossbench is undermining our democracy. This could not be further from the truth.

Back in 2006 reforms were put in place to make it difficult for any government to get full control of the upper house, and that included introducing the group voting ticket. Looking around this room right now I would say this reform is working. The crossbench is intentional. It is not an accident and not a mistake that must be reversed but an intentional decision made by our policymakers to strengthen democracy. We have an upper house that represents the diverse and wonderful people of Victoria. Before me we have the Sustainable Australia Party, the Animal Justice Party, the Reason Party, the Shooters, Fishers and Farmers, Derryn Hinch’s Justice Party and the Liberal Democrats, we have an Independent, Dr Cumming, and we have a Green.

In Victoria we vote either above the line or below the line. We go to the ballot box and we number our candidate preferences, at least one above or five below the line. Group voting tickets allow voters to vote above the line and have their preferences allocated by the party they vote for or below the line, where they can select the preferences themselves. This means that if the chosen candidate does not get the numbers, your vote will not end there. You can choose who the vote goes to after that or you can let the candidate decide for you. This does not stop the public from voting for who they want to represent them, and it by no means forces anybody to vote above the line. In Victoria we give the public a choice of how they want to vote. What could be more democratic than that?

However, the Greens do not want the public to make their own determination. What is the real reason why this motion has come to this place today? What are the facts? The Greens have become irrelevant in this place and are losing voters. Of course they want to change a system that favours negotiation, political skill and hard yakka. When you cannot play the game it is natural to want to change the rules. This motion wants to return the upper house back to just Greens, Labor and Liberal while sacrificing robust policy debate and reforms in the process. Well, we say bananas to that. Let us not forget that when five Greens members got elected to the upper house in 2014 they did not think the system was worth changing then.

This does take me back to my schooldays. This is like a game of football. We are at half-time and the Greens are actually 10 goals behind and now they want to change the rules because they cannot get a kick. This system is not a problem. It enhances our democracy and it makes our upper house the diverse institution you see before you today, where the major parties do not have control and now need to consult to achieve their outcomes.

Now, were the backroom deals that got the Greens five up in 2014 also a stain on our democracy? Apparently not. I think given the motion that you have presented today your stakeholders would like an explanation as to how your members got elected to the upper house back in 2014. Did it have anything to do with the party’s relationship with coal king Clive Palmer? If anything, it is clear to me that the Greens are suffering amnesia. Count 17 of the 2014 election results reported by the ABC stated, and I quote:

Without those votes the Greens would not have got up. To put it simply, the Greens, the preachers of climate change, did a dirty deal with coal. This motion today is intentionally misleading and deceiving voters by saying the system is corrupt. That is disrespectful to the voters of Victoria. They are smarter than that. The Greens lecture us on how politicians taking money from developers is corrupt, yet they accepted significant amounts of money from a developer from 2016 to, I believe, 2020. Goodness! The Greens have since tried every excuse under the sun in relation to this matter—more moves than Peter Daicos, Sr.

It does not end there. While the Greens may cry wolf, I cry hypocrisy. They lecture us on wage theft and how bad it is for the working community, yet the Greens members here go out and use their Ubers. They want to support that company, a Silicon Valley company that has fought its hardest not to provide its drivers with basic worker rights. Think of sick leave, think of parental leave, think of annual leave and insurance—you can forget about that. They say, on one hand, they are pro-environment and in support of other minorities and refugees, but on the other hand they accept coal votes readily, support companies who exploit their workers and line their pockets with donations from developers—hypocrisy.

You need only to look at today’s motion to see the Greens’ true priorities. All of us on the crossbench only get two opportunities a year to bring a motion, and what have they done? They want to change a law to protect their jobs. She has chosen to, rather than uplift the vulnerable, free refugees or mitigate climate change, waste a whole motion attempting to distort our democracy and solve a problem that simply just does not exist. I remind the Greens we are not Western Australia. We must not allow our judgement to be clouded by the goings-on of another state’s parliament.

The group voting ticket system in Victoria has done its job. It has prevented major parties from controlling the upper house and has diversified the political pool. It is clear that an arranged balance of power creates better policy. We as crossbenchers have worked with the government to address key concerns held by the public, industry stakeholders and human rights advocates. It is through negotiations with the government that we have been able to improve many bills. This has been no small feat. As a crossbench we consistently ensure the intent of legislation is upheld while potentially excessive and unchecked powers are addressed. Ultimately it is we who hold the government to account. Collaboration with the crossbench and stakeholders from relevant sectors does lead to improved outcomes to address key issues for Victorians today. A willingness to compromise from all sides leads to a better government and better policy. If we had the three-party system the Greens so much desire, who would be there to stop our most vulnerable from falling through the cracks? No government or policy is ever perfect. I come here to engage with the government, the crossbench and the opposition to improve government and better legislation. Can the Greens say the same? The many revised bills stand as proof of our democracy and show just how valuable the crossbench is in representing our constituents in policy debates.

I have been asked not to take this motion personally, and I do not. But I can tell you 120 000 families in the taxi and hire car industry do, when they are trying to shut us up. With no political background, seven months out on from an election I formed a political party with a group of people where English was not their first language, and I am extremely proud. We took you on at your game, and we beat you at your game. I am not embarrassed by this. I stood up and became the voice of the people who were completely ignored by major parties in this place, 120 000 families who were not heard during the taxi reforms, and we hear you trying to take their voice away now. Well, I am still here, and we will be heard. I will not support those who bully or belittle minor parties. I have had political parties approach me and tell me I must support them—I must—and I must preference them. I have had opposition members threaten me. They were going to destroy me, they said. Well, what happened? I am still here. So I say to you the group voting ticket is for the little guy. It is for all of the Davids who want to fight Goliath. It is the checks and balances that correct the super-planners and the bureaucrats who seek to make the public do what they think is good for them.

I perform this role with pride and respect and humility. I wear the vote that I got as a badge of honour. It is true that we kicked the door open; however, I am more than happy to be judged on the work we have done in this place, and I just quickly want to go to that. Since coming to Parliament we have started four inquiries: the free tram zone inquiry, the homeless inquiry—I thank Ms Patten for the work she did on it, because that is some of the most important work that this Parliament will do in this term, and I thank her Reason Party—the regional public transport inquiry and the multipurpose taxi inquiry. I managed to get a $22 million package for the taxi industry in the middle of a pandemic. That was one of the largest tailored support packages during last year, and it was twice the amount the New South Wales taxi industry received. If it was not for me, it is easy to guess what the taxi industry would have received if we were under the Greens—diddly squat. I reject this pattern.