Inquiry into the Multi Purpose Taxi Program – Speaking on Report 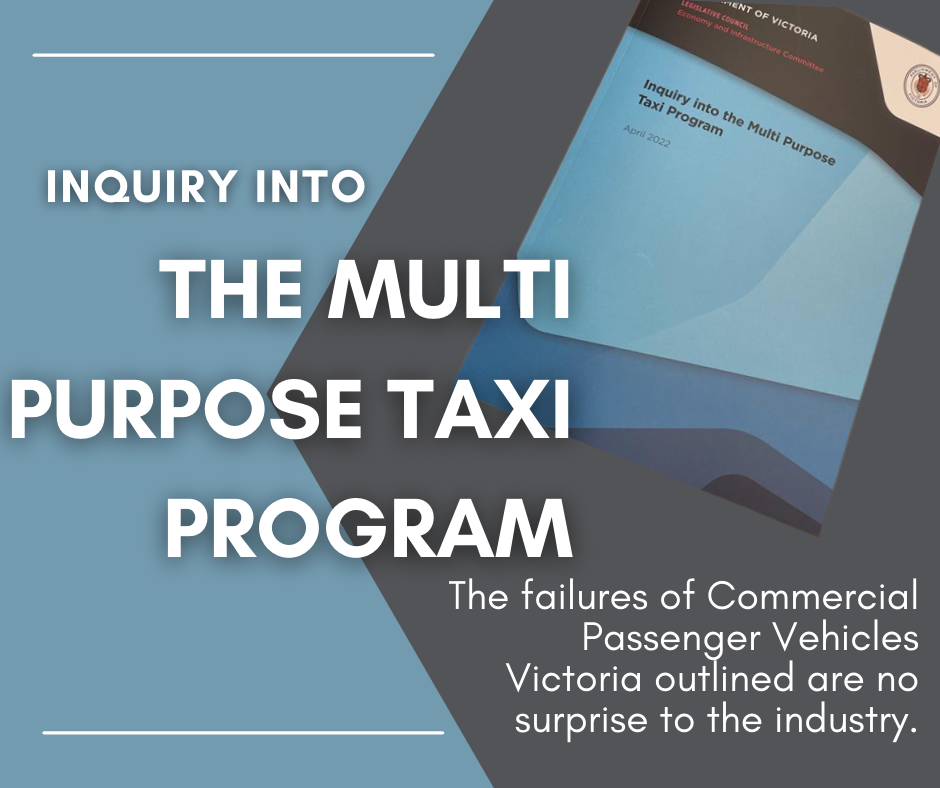 I rise to speak on the Economy and Infrastructure Committee’s report on the inquiry into the multipurpose taxi program. The failures of Commercial Passenger Vehicles Victoria outlined are no surprise to the industry. In January 2021, in the middle of the pandemic, the CPVV made the decision to extend the multipurpose taxi program to accommodate Uber—not everybody else, just Uber. For years taxis had delivered the multipurpose taxi program, undertaking training that allows drivers to transport vulnerable groups—proper training, not click and check on a website. This is a program that has long been built on trust, flexibility and safety. This is about those with disabilities having a relationship with their driver. I began this inquiry because I believed that both the taxi industry and those people with disabilities deserved to understand the reasons behind this decision. The hearings and the report have shown that there were in fact no merits, and both Uber and the CPVV resisted explaining their decision-making at every turn. In fact we are in VCAT seeking more documents about these matters.

Putting wheelchair-accessible vehicles on the road is expensive and in many cases financially unviable. We know this because Uber has trialled operating wheelchair-accessible vehicles and found it not profitable. We know this because taxidrivers and operators throughout Victoria have been begging for assistance to keep this essential service on the road.

During the inquiry we learned a lot about cross-subsidisation. What this means in the industry is that wheelchair-accessible taxi services can only be provided by an operator if they are cross-subsidised by work that is somewhat more profitable than normal taxi work. The problem with what the regulator has done is that they did not do the work on the impact of opening up the multipurpose taxi program to another 80 000 vehicles. We heard from taxi operators that this means it became that much harder to keep wheelchair-accessible vehicles on the road, with many operators already removing their vehicles because they could not continue running at a loss.

Unfortunately, despite the CPVV being the industry regulator, it was made clear in finding 9 in this report that they have no idea how many wheelchair-accessible vehicles are active in Victoria or if they are based in regional or metro areas. In fact you can say that for the entire industry. The committee found that the CPVV is likely unaware of how critical aspects of the multipurpose taxi program are functioning. This was made clear through many, many data errors as well as different numbers being provided and information that, once found false, had to be redacted. Data management by the CPVV has been a disaster, and this is nothing new. I was pleased to see recommendation 1 of the report be that the CPVV address their ongoing data management—

Mr BARTON: I hope my speaking is not interrupting those talking, Chair.

Mr BARTON: I was pleased to see recommendation 1 of the report be that the CPVV address their ongoing data management issues and report to the Minister for Public Transport within six months on their weaknesses and remedies.

Speech on Report from the Inquiry into the MPT Program

Another appalling discovery in this inquiry was the misinformation and manipulative use of information regarding the multipurpose taxi program trial in Geelong. For Uber, this was undertaken before the extension. While it was initially claimed that only four people took part in this trial and 500 people were sent invitations to take part, we later found out that in actual fact six people took part in the trial. There has been no justification by either the CPVV or Uber about why these two individuals were left out of the survey process or the freedom-of-information requests, but we can say we know why it is: because one of them was highly critical of the service, although we can certainly read between the lines.

Finding 4 of the report states that for the trial assessing user experience six participants is not suitable and a larger participant pool would be required. Another important recommendation is for the government to raise the lifting fee for the wheelchair-accessible vehicles to encourage existing operators to continue as part of the multipurpose taxi program. If adopted, this would make a significant difference to ensure that Victoria’s most vulnerable can access a wheelchair-accessible vehicle in their community.

Safety was a theme consistently brought up during this inquiry. The report rightly recommends that all drivers operating in the multipurpose taxi program install a compliant security camera, cameras only taxis have now, and the government implement a consistent set of minimum vehicle safety standards and requirements for those in the program to combat— (Time expired)