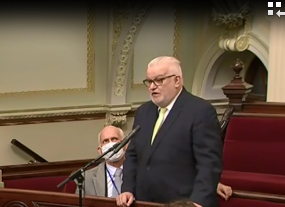 Mr BARTON (Eastern Metropolitan) (11:42): My question today is for the Attorney-General, representing the Minister for Industrial Relations. Last week Fair Work Australia announced a 2.5 per cent pay rise for the most underpaid workers in this country, which will equate to an additional 49 cents an hour. This is on top of a 1.75 per cent increase last year. This is absolutely needed. However, this minimum wage increase does not address the vulnerability of those who work in the gig economy or those impacted by the gig economy. Taxi drivers are sometimes working at half the minimum wage—no superannuation, no annual leave, no carers leave, no sick leave. So my question is: what is the government doing to ensure that these vulnerable transport workers can receive a living wage?

Ms SYMES (Northern Victoria—Leader of the Government, Attorney-General, Minister for Resources) (11:43): I thank for Mr Barton for his question and indeed I will past that on to Minister Pallas, the Minister for Industrial Relations, for a detailed response. But I would like to thank Mr Barton for his continued efforts in raising these important issues, of course acknowledging that a minimum wage increase, which was advocated for by the Victorian government through a submission that was put through to that process, was certainly something that we were committed to. But I do acknowledge the points that you make. There are people that fall the cracks, and gig economy workers are certainly some of those. These are important matters that require a response from both federal and state governments, and I will get you more details in relation to efforts from the Victorian government in due course.

Mr BARTON (Eastern Metropolitan) (11:44): Thank you, Minister. Rideshare companies have been allowed to determine their own ride fares. They have chosen to subsidise travel on some trips to gain market share and undercut competitors and then surge prices at other times to exploit demand. Taxis are not given the same luxury. Maximum fares for taxi services are determined by the Essential Services Commission. The 2017 transport reforms were intended to create a level playing field, and I can say with absolutely certainty there is no level playing field. So my question is: why is the government treating these transport workers differently to the other transport workers, such as the rideshare operators?

Ms SYMES (Northern Victoria—Leader of the Government, Attorney-General, Minister for Resources) (11:44): I will certainly pass on Mr Barton’s second question to the minister.