Fair Conduct and Accountability Standards for the Victorian On-Demand Workforce. 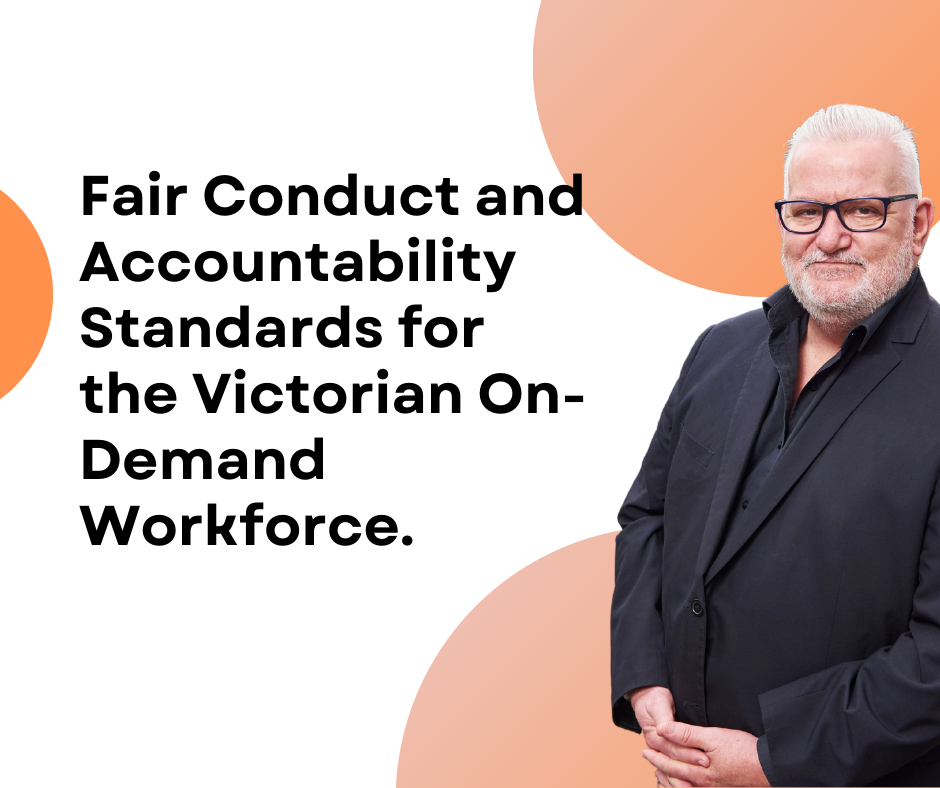 Below is Rods response to the proposed Fair Conduct and Accountability Standards for the Victorian On-Demand Workforce.

I am pleased to provide feedback on the proposed Fair Conduct and Accountability Standards for the Victorian
On-Demand Workforce to help guide a better future for the cohort of people who form part of this sector.

In many cases, these individuals are the working poor -under-valued, undermined, unprotected and exploited.
Yet, these workers are heavily relied upon in many of our booming essential industries, particularly those within
the broader transport sector including goods and service delivery and passenger transport.

Perhaps at no other time in history has the disparity between employed and ‘unemployed’ workers been more
evident than during the pandemic. Insecure work, financial stress, ineligibility for many government support
packages and difficulties applying for them, exposed and exacerbated the weakest parts of our armour in
control of the spread of COVID-19. These circumstances also amplified the extent of the pressures and
conflicting factors many of these workers face to provide for themselves and their families.

My contribution to this discussion stems directly from my background as a hire car driver and commercial
passenger vehicle business owner for over 30 years. This is in addition to the many interactions I have had with
stakeholders in the on demand workforce since my election in 2018 as member of the Victorian Legislative
Council for the Eastern Metropolitan Region and Leader of the Transport Matters Party. It has become apparent
throughout the pandemic that many of the workers in those critical, yet unskilled roles needed to keep our
communities functioning have been overlooked and insufficiently unsupported by governments and the
platforms with which they are engaged. There must be better protections afforded to the workers who bear all
the risk and financial burden associated with providing services to our communities.

The conduct and accountability standards which have been outlined reasonably call for increased transparency
surrounding potential remuneration and ongoing costs and expenses for on demand workers as well as better
engagement and consultation between platforms and their representatives in defining work status, contractual
terms, mechanisms for dispute resolution, OHS management and worker compensation.

Broadly speaking, the proposed standards would make significant improvements to the terms and working
conditions of on demand workers. However, what is lacking is an outline ensuring these standards are adopted.

It would be naïve to think that large corporations which have found economic success despite traditionally
treating such workers as an expendable commodity and relying on burn and churn models of engagement would
willingly apply such standards without coercion. The immense power imbalance between the platform and
those who engage with them as independent contractors, an absence of any leverage for these workers and the
demography of this cohort would make any meaningful negotiation between these parties difficult and one
sided.

Compounding this, we have prior examples of some of these platforms, particularly in the passenger transport
sector, which have shown a complete disregard for local laws and regulations within the industries they
participate. It would be difficult to imagine that these platforms will suddenly adopt the proposed standards and
become good corporate citizens with sincere concern for their workforce without any punitive incentive. Selfregulation would not work. There must be in place some form of independent oversight and scrutiny of the
processes described which would ensure a more equitable power distribution in these consultations and
ultimately better and fairer outcomes.

Specifically, there needs to be independent processes which deal with complaints about the application of
standards, consequences for failing to implement and adhere to standards and a mechanism for compliance
review.

Recognising that there may be constitutional and legislative limitations associated with the implementation of
these standards, it is critical that there be some form of regulatory oversight to make certain that obligations are
being met. Without this in place, it would be hard to take seriously the sincerity of this inquiry process and more
difficult to foresee how the ultimate aim of making real improvements within this sector of our workforce will be
achieved.