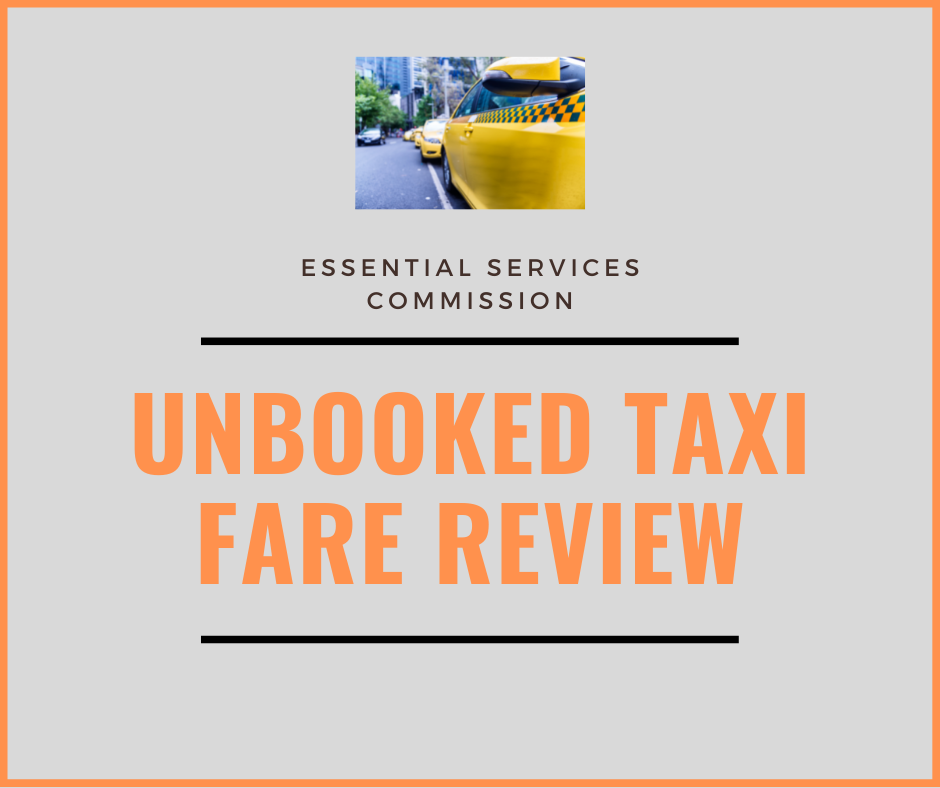 This week Rod received a letter from the Chairperson of the ES Ms Kate Symons in regard to the the taxi fare review. See her letter and Rods response below.

I am writing to provide clarification to some recent media reports on the 2022 review of maximum fares for un-booked taxi fares (the review) being undertaken by the Essential Services Commission.

Thank you for your interest in our review. In particular, I note your media release published on 16 February 2022 and other comments made by you publicly including on social media regarding the review.

I wanted to take the opportunity to clarify certain aspects to alleviate any confusion as to the role of the commission in undertaking this review, its timing and process.

We have just commenced our scheduled two-yearly review, which the commission is required to undertake under the Commercial Passenger Vehicle Industry Act 2017. We are still in the process of collecting information, and as you will be aware have just published our consultation paper on 16 February 2022 to commence the review. We have not made any proposals on whether maximum fares should go up or down. This is clear if you read our media release or our consultation paper.
In the media release and the consultation paper we discussed our legislative objectives which include promoting the long-term interests of Victorian consumers and the efficient provision and use of un-booked taxis.

We also discussed recent legislative changes and the implications of replacing the transport workers wage index with an index derived from the Fair Work Commission wages outcomes, which has been higher. We also identified rising fuel costs were leading to increases in the taxi cost index. I do not consider our work implies we are thinking of fare cuts.

At this stage of our review, we are seeking stakeholder feedback on the approach we should use and the information we should consider as part of our review. We encourage all interested stakeholders to make a submission on our consultation paper, due by 5pm on 16 March 2022. Input from stakeholders is important in order for our determination of un-booked taxi fares to best reflect efficient prices.

If you have any further questions about our review, we encourage you or your office to get in touch

Thank you for your correspondence dated 1 March 2022 (RM/25/6621) clarifying the considerations and role of the Essential Services Commission in their review of unbooked taxi fares.

You imply in your letter that my public response to media reports about the fare review may have originated from some confusion surrounding the functions of the ESC. For the record, I am well aware of the legislative objectives and requirements of the review as well as the process and timing that it follows.

Despite what may have been articulated in the ESC’s media release and consultation paper, the message and media headlines were clear and most definitely indicated that there was potential for a reduction in fares. While this may not have been the communication intended by the ESC, there was nothing said or done then to correct the point and there has been nothing said or done since.

My reaction to the media reports was in direct response to the way in which news of the review was presented and the overwhelming backlash that ensued. The entire industry read the articles and watched the news with the same interpretation that there was some consideration toward a fare reduction.

I was personally inundated with calls over a number of days from angry stakeholders who could not believe what they were hearing. My parliamentary office as well as that of the Transport Matters Party which I represent were also swamped.

The vast majority of taxi drivers would not have come across the media release from the ESC nor would they be seeking clarification outside of what appeared in the Herald Sun and on Channel 9. These are the sources of information they rely on.

The industry is feeling extremely let down by the government and the ESC. This is perfectly understandable in the context of rising fuel and operating costs, deregulation, market saturation, COVID and fares that have increased only once in the last 14 years. All the while alongside this we have Uber surge pricing at eye watering levels more commonly than not. It has also been pointed out to me that electric scooters are even charging comparable rates to taxis at 45 cents per minute. Is it any wonder that taxi drivers feel as though they are the lowest common denominator?

The past 2 years have been devastating for the commercial passenger vehicle industry. Many stakeholders received no income support throughout the pandemic and have struggled with emotional and financial issues. A significant number continue to be burdened by legacy debts for taxi licences they no longer own since they were revoked as part of industry reform. To be faced with the possibility that their income may be further reduced following the fare review was devastating.

Taxi drivers receive no holiday pay, no sick pay or superannuation. Since the industry reforms of 2017 they have only known a material reduction in revenue due to an irresponsible flooding of the market with an unprecedented number of CPVs on our roads. This has decimated their incomes. Compounding this is the stagnation in fares over much of the last 14 years. In real terms, without indexation being applied as a minimum, they have received a pay cut each and every year for well over decade.

Particularly since the damaging reforms of 2017, CPV drivers have had to work longer for less. They have pivoted across the various platforms desperately seeking a better deal for themselves but ultimately learning that exploitation is rife. Any one of several solutions would immediately address this dilemma and that is to either deregulate all fares, markedly increase the maximum fare rate or moderate the supply side of the market. Any suggestion to the contrary would be reckless.

I and others are not confused by the communication that was conveyed by the media relating to the fare review. Stakeholders are also acutely conscious of the fact that many other services have some sort of indexation applied to their pricing, yet history has shown that the same considerations are not afforded to the CPV industry.

With due respect, it is this and the silence of the ESC since the media reports which have allowed the notion of a possible a fare reduction to gain traction. Expectation based on previous conclusions of fare reviews and the absence of any correction to the point, Ministerial, Departmental, or from the Commission, has presumed an outcome and derailed an already fragile industry with a seemingly very grim future for its stakeholders.