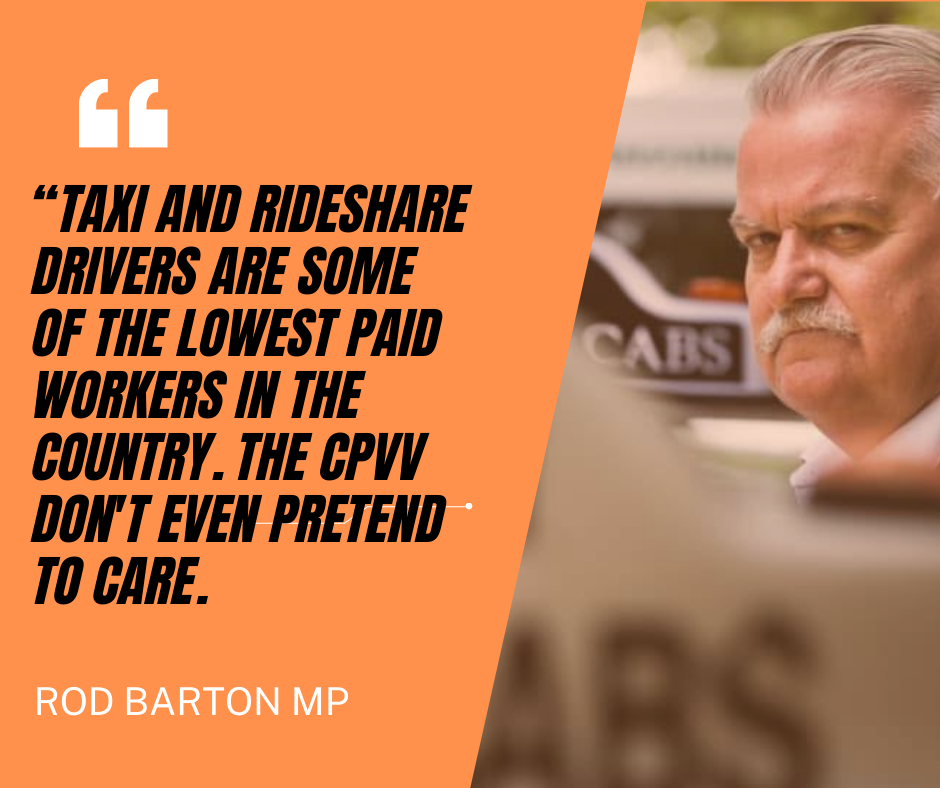 A recently published report by Commercial Passenger Vehicles Victoria (CPVV) examines trends in fares for taxi and rideshare services to identify potential areas for misuse of market power. What is clear from this report is that the CPVV are determined to see what they want to see, ignoring all signs that the industry is on its knees.

Rod Barton MP is outraged at the regulator’s ignorance of the struggle drivers face, fighting for a smaller piece of the pie every day.

There are clear discrepancies throughout the report. The report notes that there have been 60 million booked fares in the 19/20 year and claims the data set used for the report represents approximately 80% of all booked trips. Elsewhere, the report claims to have ‘analysed the fare data from more than 37 million booked trips.’ This raises some obvious questions.

If the data set looked at 80% of all 60 million booked trips, the CPVV would have a data set of 48 million trips. Why is it that the report only chose to analyse data from 37 million? What data has been excluded and why?

The report holds no answers to such questions.

Apart from what appears to be the selection of specific data to skew the analysis there lies other inconsistencies in the report. While the report legitimately separates fares collected in different zones (metro, urban, regional and country) it does not separate data collected from taxi and rideshare. By failing to differentiate between the two services it is impossible to determine whether an abuse of market power exists.

Maximum fare rates for unbooked taxi services are government regulated while rideshare operators are left to their own devices. For pre-booked work, it is also known that despite taxis being able to set fares outside of regulated rates, fares are calculated to sit fairly close to what would have been on the meter otherwise. By choosing to lump rideshare fare data with highly regulated taxi fare data the report conceals where the abuse of market power may lie and that is within the dynamic pricing model in the rideshare sector. Rideshare operators have long employed surge pricing strategies to exploit demand, yet this is not acknowledged in the report.

The CPVV have failed to conduct a meaningful analysis of the data, preferring to provide a skewed version of reality that suits their narrative of the industry.

Even more condemning is the CPVV’s view of market economics. The CPVV celebrates that the industry managed to grow during COVID-19 despite a downturn in the number of trips by an average of 57%. This is an alarming perspective.

Why is the CPVV rejoicing in extreme market saturation and an unsustainable level of competition within the industry?

Drivers are some of the lowest paid and poorly protected workers in the country. According to data submitted by Uber to a Senate inquiry in March this year, drivers and delivery workers in Sydney make less than the minimum wage for casual workers, even at peak hours. On top of this drivers must pay for their own vehicles, petrol, insurance and superannuation.

Barton believes that drivers should not be slaves to the middle class. Someone must pay for the real cost of providing the service.

The CPVV must address the level of market saturation to ensure that the industry is commercially sustainable, and drivers can earn a living wage.

“Taxi and rideshare drivers are some of the lowest paid workers in the country. The CPVV don’t even pretend to care.”

“This report makes clear the attitude of the CPVV. They will prioritise competition over all else, forcing drivers to work one, two and three jobs just to put food on the table.”

“The Transport Workers Union found 74% of surveyed food delivery workers reported they were struggling to pay their bills and buy groceries. It surprises me every day that the CPVV do not see this as a legitimate concern.”