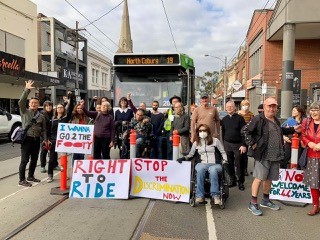 Mr BARTON (Eastern Metropolitan) (11:49): My question today is for Minister Pulford, representing the minister for transport. We have seen protests across Victoria these past weeks as people with disabilities face inaccessibility on public transport. Many stories were shared. We heard of individuals waiting 3 hours for a taxi because the accessible V/Line carriage they had booked was not attached to the train. A local taxi driver informed the individual this happens at least twice a week. We heard of a person in a wheelchair being put in the luggage carriage of a V/Line, rocking the whole way to Melbourne, his mum standing with her arms over him to protect him from other people’s suitcases and bikes. So I ask: Minister, it has been highlighted that people with disabilities are still struggling to access public transport services; what are the government’s plans to fix these issues?

Ms PULFORD (Western Victoria—Minister for Employment, Minister for Innovation, Medical Research and the Digital Economy, Minister for Small Business, Minister for Resources) (11:49): I thank Mr Barton for his question and for his advocacy around these issues. I will seek a written response from Minister Carroll for Mr Barton.

Mr BARTON (Eastern Metropolitan) (11:50): Thank you, Minister. For wheelchair users the Melbourne tram network is unusable on most routes and most stops. The Disability Discrimination Act 1992 requires that all tram stops must be fully compliant with the Disability Standards for Accessible Public Transport 2002 by 31 December 2022. As it stands 73 per cent of all tram stops and 62 per cent of trams are inaccessible to people using wheelchairs, mobility aids and prams. If upgrades continue at the current rate, it has been estimated that tram stops will not be accessible until 2066. The government should apply the same commitment to making trams and trains accessible as it does to removing level crossings. My supplementary is: Minister, of the 1700 tram stops in Melbourne how many will be accessible to people with disabilities by the end of this year?

Ms PULFORD (Western Victoria—Minister for Employment, Minister for Innovation, Medical Research and the Digital Economy, Minister for Small Business, Minister for Resources) (11:50): I thank Mr Barton for his further question. It is a very important subject. It matters to and impacts many people in the Victorian community. I will seek a written response from Mr Carroll about the rate of those upgrades and progress on achieving that.

I thank the Member for Eastern Metropolitan Region for his question and interest in this important issue.

The Andrews Labor Government is dedicated to ensuring Victoria’s transport network is accessible for everyone and through the $80 billion Big Build we are delivering a generational improvement in transport accessibility right across the state.

Since we came to office we have rebuilt 44 train stations across the state with another 54 on the way, many of these are being delivered part of our program to remove 85 dangerous and congested level crossings. In metropolitan Melbourne, 65 High-Capacity Metro Trains and 25 X’Trapolis 2.0 trains are being delivered and will replace older trains which do not meet contemporary accessibility standards. We are also delivering more accessible train services and infrastructure across regional Victoria through our orders of 47 V/Locity trains and the $4 billion Regional Rail Revival.

On the tram network, the Government is investing in new low-floor trams, building accessibility into the design of Next Generation Trams and developing a plan to deliver more level access tram stops. We have invested  $1.8 billion in 100 Next Generation Trams and supporting infrastructure, which is on top of the 100 new low-floor E-Class Trams which are already in service. Low-floor E-Class trams provide audio and visual information, and dedicated spaces for passengers who use prams or mobility aids. Next Generation Trams will be rolled out across Melbourne from 2025, providing comfortable, accessible and energy efficient journeys.

Just over a quarter of Melbourne’s tram stops have been upgraded to support level access boarding, with over 450 level access tram stops. Across the network, we are progressively rolling out surface tactile indicators to kerbside stops to improve safety for passengers with vision impairment. Upgrades are also being made to lighting, shelter and safety, including enhanced line marking at some kerbside stops.

Increasing the voice of people with disability is essential to creating an accessible and inclusive transport system. That’s why the Victorian Government has appointed Tricia Malowney OAM as Victoria’s first Chief Accessibility Advocate for the transport portfolio. The Chief Accessibility Advocate is overseeing the development and implementation of policies, programs and strategies with key stakeholders to improve inclusion and access. The Advocate will monitor the implementation of DoT’s responsibilities to provide inclusive and accessible transport services.