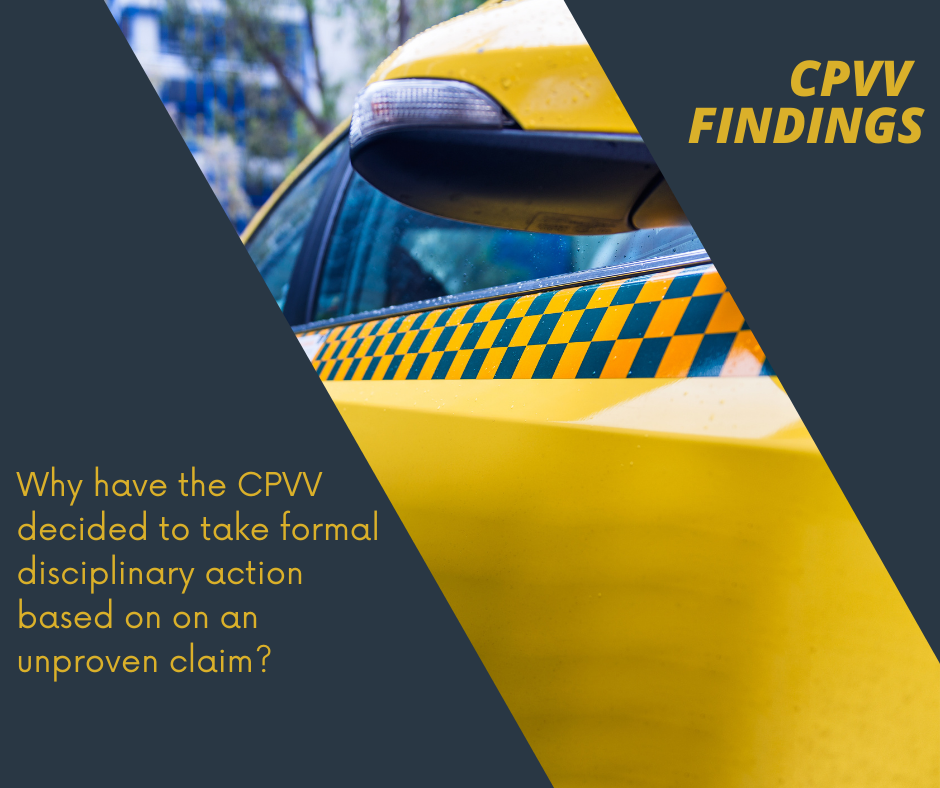 My question today is for Minister Pulford, representing the minister for transport. A taxidriver had two customers get in his car who were somewhat over-refreshed and had become tired and emotional. That led to altercations, and when they started to become difficult and threatened and abused him he pulled over and asked them to get out of the vehicle. He then had a bottle thrown at his head and got back into the vehicle and drove up and around the corner. He immediately notified the police and notified Commercial Passenger Vehicles Victoria. There was an allegation that in his departure he hit the female passenger with his car. However, after an investigation by Victoria Police there was no finding made against him. Despite VicPol’s finding, the CPVV have taken disciplinary action and put a warning on his record, which can be used to cancel his accreditation in the future. Minister, why is the CPVV taking disciplinary action against the driver over an allegation where VicPol made no finding?

Ms PULFORD (Western Victoria—Minister for Employment, Minister for Innovation, Medical Research and the Digital Economy, Minister for Small Business, Minister for Resources) (12:26): I thank Mr Barton for his question, which I will forward to Minister Carroll for a response. As Minister Stitt often states in this place, every Victorian workplace needs to be a safe workplace. Everyone is entitled to go about their work or their business without fear of the kinds of awful incidents that you have described. So I would extend our sympathies and our care and concern to the person involved in this incident, and in accordance with our standing orders we will provide a response on that matter.

Mr BARTON (Eastern Metropolitan) (12:27): Thank you, Minister. This is a very experienced driver with a perfect track record over many decades. This driver has been the victim of assault and now his record has been tarnished by disciplinary action, which is completely baseless, from the CPVV. He is entitled to be considered innocent unless proven guilty, so I ask, Minister, as this is only fair: can you remove this unnecessary warning from the driver’s record in line with the outcome of the Victoria Police investigation?

Ms PULFORD (Western Victoria—Minister for Employment, Minister for Innovation, Medical Research and the Digital Economy, Minister for Small Business, Minister for Resources) (12:28): Thank you, Mr Barton, for the supplementary question. We will provide a written response in accordance with the standing orders.

I thank the Member for Eastern Metropolitan Region for his question and long-standing advocacy for safety in the commercial passenger vehicle industry.

Safety is the Andrews Labor Government’s number one priority, which is why we introduced a safety duties framework for the commercial passenger vehicle industry that places obligations on all industry participants, including accredited drivers, to ensure that services are delivered safely.

CPVV works closely with Victoria Police to review available information when investigating safety incidents or complaints made against drivers and ensures, as part of this, fair and equitable process.

CPVV can take disciplinary action where a driver’s conduct does not meet public care objectives as they relate to safety, comfort, amenity and convenience, even in scenarios where there has been no criminal offence. Disciplinary action taken may include issuing a warning with respect to the driver’s accreditation. Again, the safety of drivers and passengers is our priority.

We acknowledge that commercial passenger vehicle drivers can sometimes be faced with difficult passengers. Assaults by passengers on drivers is completely unacceptable. To further support drivers, CPVV is in the process of increasing educational content for drivers, including advice on how they can keep themselves and passengers safe when dealing with aggressive passengers and how to de-escalate potentially dangerous situations.

The Andrews Labor Government is committed to ensuring safe outcomes for the Victorian community.

CPVV takes disciplinary action against drivers to ensure the industry provides safe services to passengers. When assessing whether to take disciplinary action in situations where conduct does not amount to a criminal offence, CPVV must give due consideration as to whether the driver’s conduct is inconsistent with public care objectives as they relate to safety, comfort, amenity and convenience. The safety of drivers and passengers is our priority.

If a driver is not satisfied with a disciplinary decision made by CPVV, the Act sets out rights of review, including the right of internal review and also to appeal to the Victorian Civil and Administrative Tribunal. I am advised that the relevant driver has been advised of his review rights in this regard.