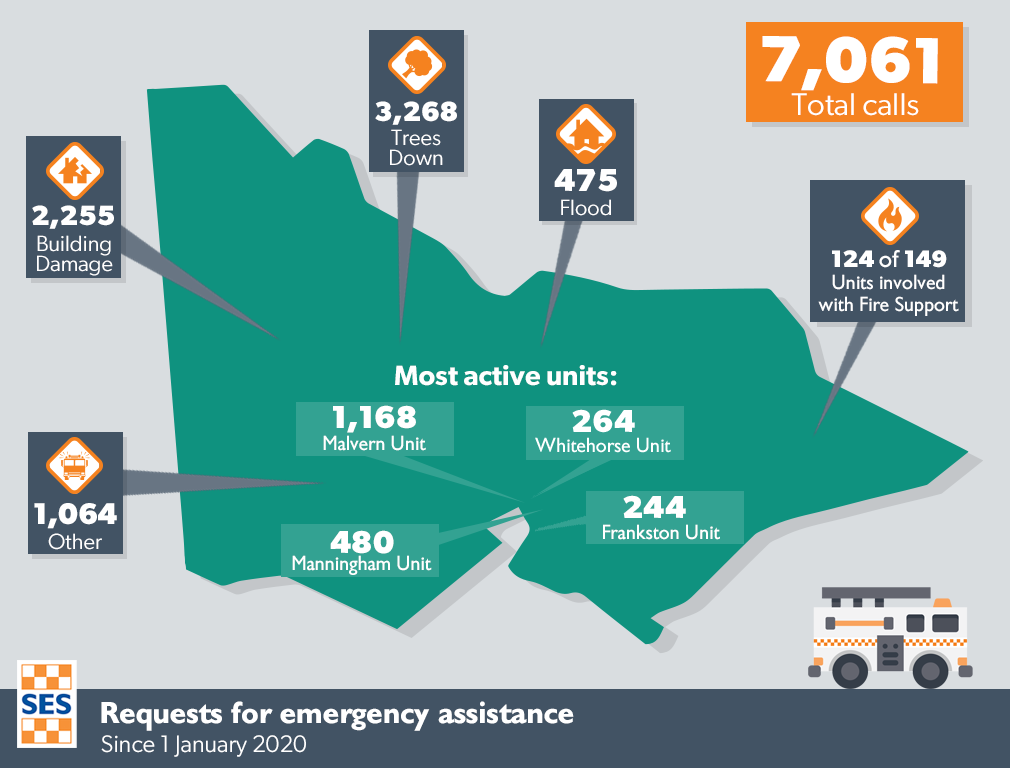 Rod has been unwell this week and was unable to speak to the bushfire motion in the Legislative Council today, but he wanted to share his prepared notes and acknowledge the great work done by volunteer SES groups across the state, and especially in Manningham during recent storms.

A great man once said “never was so much owed by so many to so few”.

Churchill spoke of the royal air force crews who were at the time fighting the Battle of Britain … and today his words ring true in reference to the devoted men and women of our firefighting and rescue teams, who “undaunted by the odds, unwearied by their constant challenge and mortal danger, are turning the tide … by their prowess and their devotion.”

I want to take a minute to recognise the great work of this Government,  of Premier Andrews, the Minister for Police and Emergency Services Lisa Neville, Emergency Management Commissioner Steve Crisp, CFA chief office Steve Warrington,  staff from the Department of Environment, Land, Water and Planning and the emergency management teams in showing leadership in this crisis. We also had members and staff across the parties and electorate offices out volunteering their time across the state. MPs were on the trucks and on the end of hoses. I’m proud to be part of this parliament.

As Australia we owe so much to the men and women, both career firefighters and our invaluable CFA volunteers, our military services and other volunteers from community organisations and local communities who turned out and turned up over the past few months to save lives, homes and animals.

Many have and will continue to speak of the great work done by MFB and CFA firefighters across our state. I can only add my thanks, my gratitude for their tireless efforts, their prowess and their devotion. Thank you one and all.

But I wish to say a special thanks to the Victorian State Emergency Service – these are the often unsung  and unseen heroes who provide services for flood and storm emergencies and provide the largest road rescue network in Australia. The SES is made up of 95 percent volunteers with over 5000 specialist trained people supporting 200 staff in 149 units across our state.These teams have been busy responding to over 3300 calls for assistance between January 15 and January 22, supporting CFA, Police, Forest Fire services and Australian Defence members across the state, with over 80 percent of their volunteer base turning out to help with fires, flood and storms.

And they are still going – just in the last week VICSES volunteers have been called to 670 requests for assistance in the central region – 509 of those incidents related to trees down, 100 to building damage, 22 for flood, and 11 for rescuing at least one person.

One of the VIC SESs key roles is building resilience within communities so that in times of emergency they know what to do and are able to work together and with emergency services, local government and each other before, during and after an event.

These are the bonds we see strengthen and grow as we work together to rebuild following storms and fire, and the SES should be congratulated, should be so proud, of the work they do to facilitate this.

Our communities have needed resilience during this dreadful fire season to remain, in Churchills words “undaunted by the odds and unwearied by constant challenge and mortal danger”…

And resilience has been tested over the past few months as firefighters and SES crews returned from helping NSW fire efforts, to battle fire storms in one corner of our state, flooding and hail damage, fallen trees and collapsed buildings across the city and south west, and huge dust storms that threw so much topsoil from northern parts of the state into the air that it carried all the way to Melbourne to be dumped in rain across the city.

On  Sunday, January 19 hail stone the size of golf balls rained down on Melbourne. In my region Manningham SES were called to around 450 incidents that day across the hardest hit suburbs of Warrandyte, Doncaster East, Templestowe, Doncaster and Bulleen.

The ceiling caved in at the Woolworths in Templestowe, and my own office in Doncaster flooded that day. Just as we dried out the red rain from dust storms up north saw us flooded again

That particular storm event hit Warrandyte hard, with surrounding suburbs barely effected as the storm took a linear track down the Yarra River to Bulleen, where it rested … if a storm can do that .. before then moving down to Malvern and “smashing” down there.

“Smashing” is the word  Manningham SES VSO Will Leggat used to describe the storm that came through the eastern metro region on January 19.

Mr Leggat is still working, assisting fire crews in East Gippsland who continue to battle fire and the massive clean up in burnt out communities.

He told us that the large hail stones that hit Warrandyte smashed roof tiles, skylights, house window, cars, knocked over trees on roads, cars and houses, and brought down a thick blanket of leaves which blocked road drains resulting in mass flooding.

The hail also loaded gutters causing rain water to flow into roof cavities.  Heavy rain through broken roof tiles and flowing in from blocked gutters  resulted in roofs and ceilings collapsing in homes.

Minor injuries were reported from ceilings falling in on top of home owners.

Wind in some areas was so extreme that one call  was received from a homeowner who found his neighbour’s garage roof in his back yard.

Almost 450 calls for help were received and managed in the Manningham area in that short space of time as houses were destroyed in minutes.  Families had to leave their homes as they were uninhabitable with three families in the area were displaced and lodged through Manningham Council’s displaced persons program.

Two and a half days later, all jobs had been attended to by the SES effort but the requests for assistance from people returning from holidays to damaged homes kept coming.

Manningham SES volunteers gave up their families and day jobs to assist throughout the response.  An important aspect of the incident management was the triage of jobs through the Incident Control Point operating out of SES Local Headquarters in the Manningham Depot at the north end of Blackburn Road.  Dedicated volunteers followed up on every call from homeowners to determine how SES crews could help.

Four of the volunteers working in that control point experienced massive damage to their own houses and many others overly extended themselves to ensure Manningham residents were attended to.

One of those volunteers, Megan Crane, who worked in the control point and spent time out on the trucks helping to patch roofs over the three days,  went home to find neighbours cleaning up the hail damage to her own yard.

The Warrandyte Community really rallied – the storm was so unusual that some streets were heavily smashed while others hardly touched.

It is heartening to see that Victorians have been inspired by the work of our emergency services, with a surge in volunteers approaching CFA and SES, lining up for training so they can contribute next time.

I understand there is a waiting list with CFA across the state but it is heartening to know that when things calm down there are plenty of ordinary Australian’s ready to train and learn how to protect their communities.