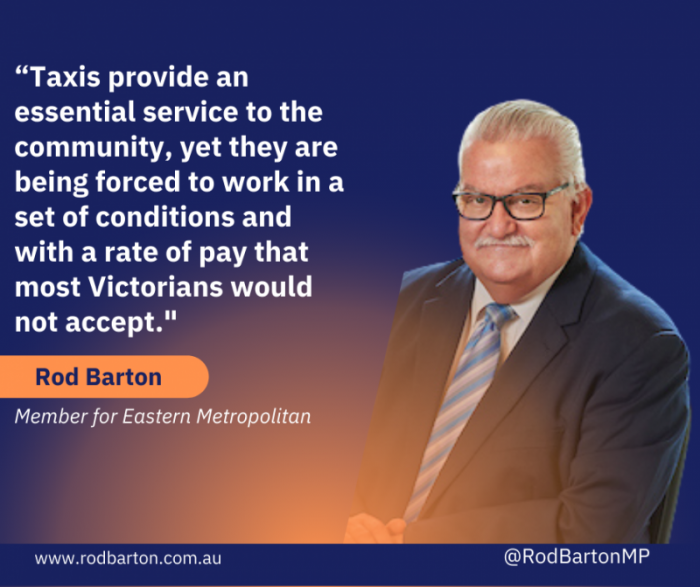 The Essential Services Commission (ESC) has just announced it will be reviewing the maximum fares payable by passengers hailing a taxi on the street.

This fare review has only come about after six months of bureaucratic nonsense and pressure from Rod Barton MP.

Barton made a call to action in June 2021, asking the Government to allow taxi drivers a living wage.

Barton believes this consultation paper is the beginning of yet another lengthy, bureaucratic process. The industry doesn’t want a pay increase in a years’ time, they need a pay increase now.

These transport workers have not had a fare increase since 2014, 7 long years ago. These are our most essential workers and our most vulnerable workers.

Taxi drivers get no holiday pay, no sick pay, no superannuation, and no carers leave. Yet, they are expected to work for half the minimum wage. This must be fixed.

In the past year alone, fuel prices have increased by 32%. Various government charges have increased in recognition of inflation, yet taxi drivers are left with less and less income fighting for a smaller piece of the pie every day.

The ESC has proven to be the wrong body to determine maximum taxi fares. Barton believes it is irresponsible of the ESC to deliver only 1 pay rise in 14 years, given the sharply rising rents, petrol prices and tolls. Taxi drivers are the working poor and the ESC appears to want to keep it that way.

Barton urges the regulator and the ESC to allow taxi drivers the ability to earn a living wage and increase the maximum fares immediately.

Quotes attributable to Member for Eastern Metropolitan and the Leader of the Transport Matters Party Rod Barton MP:
“Taxis provide an essential service to the community, yet they are being forced to work in a set of conditions and with a rate of pay that most Victorians would not accept.”

“Bills, rent, school fees, groceries, petrol prices… these are all things taxi drivers are worried about while the ESC conducts their time-consuming review. Taxi drivers need a pay increase now.”